After some upheaval in the camp and a league campaign that didn’t finish all that well, despite promotion to the top tier, many felt Donegal footballers were vulnerable as they faced up to Derry in the Ulster quarter-final on Sunday.

However, a strong opening in the second-half, highlighted by Leo McLoone’s goal, saw Jim McGuinness’ side clear the tricky hurdle at Celtic Park on a 1-11 to 0-11 scoreline.

Next up for McGuinness’ troops is a semi-final date with either Fermanagh or Antrim on 22 June. To most observers that assignment should not present too much difficulty, but McGuinness is adamant that his focus will only be on the next game and not on a potential Ulster final appearance.

Speaking to RTÉ Sport after the victory over Derry, the Donegal boss said: “The Ulster Championship is a massive competition in this part of the world. In terms of our preparation for that competition we always do the exact same thing year in, year out, that is take it one game at a time.

"The day you don’t do that is the day you’re beat."

"We’ll be faced with a lot of challenges, physical and tactical and everything else. We have to try and meet those challenges and if we do that we’ll progress to the final.

"That’s the way it has always been and that’s the way it always will be in Ulster. That’s where our focus will lie. It’s a dangerous thing to get too far ahead of yourself and we won’t be doing that." 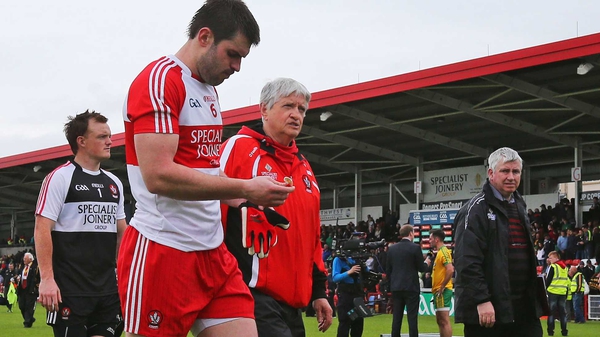