Derry manager Brian McIver was unhappy with some of the refereeing decisions as his side exited the Ulster Football Championship at the hands of Donegal.

The Oak Leaf County led at half-time and ran Jim McGuinness' men to within a goal, 1-11 to 0-11, but McIver was not pleased with the performance of referee Joe McQuillan.

A failure to award a free to Derry’s Gareth McKinless, which was followed by a Donegal score, and a late black card for James Kielt were among the incidents that annoyed the Derry boss.

Asked about the referee’s performance after the game, McIver told RTÉ Sport: “Let’s put it like this, I would like some of [the decisions] explained to me from the GAA authorities but that’s not likely to happen.

“At the minute I better do nothing about it because it wouldn’t be a good idea for me to go near anybody.”

He added: “We knew coming in here today we were facing the 2012 All-Ireland champions, a good side and we knew we were going to have to play really, really well. To be fair, I thought over a great percentage of the game we did that.

“Just that crucial ten minutes after half-time, we didn’t turn up for the second half, Donegal got the crucial scores that proved the difference.”

On the other side of the fence, McGuinness felt that his decision to switch Michael Murphy to full-forward paid dividends and looked forward to a semi-final meeting with either Fermanagh or Antrim on 22 June.

“Derry obviously have a certain style of play, possession football, and we felt we had to deal with that in the first half,” said the 2012 All-Ireland-winning manager.

“In the second half we put Michael to the edge of the square and it worked well. We got the runners off it and got a couple of scores off the back of it so we’re delighted with that.

“The most important thing is we’re in the Ulster semi-final and that’s what our focus was coming into the game and we’ll focus on that now for the next number of weeks.” 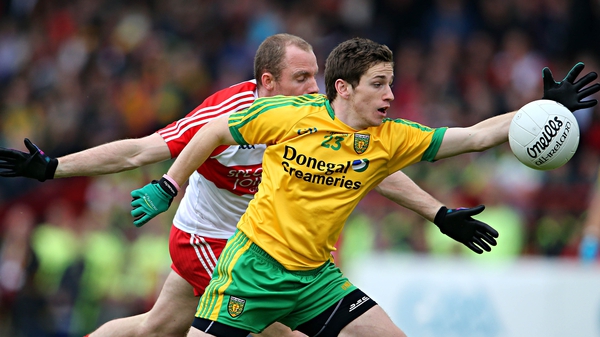