Cork boss Brian Cuthbert admits his side struggled to cope with Dublin when they went on a second-half rampage during the Allianz Football League semi-final yesterday.

Having led by ten points at one stage, the Rebels held an eight-point advantage at the break but were stunned as the All-Ireland champions hit back with a 2-13 haul in the second period to win by 2-20 to 2-13 at Croke Park.

Cuthbert told RTÉ Sport: “Once Dublin got momentum you could see their main game players come into the game and we found it very difficult to win possession on the kick-out, and wave after wave of attack just came at us.

“Their experience and their class shone through, to be honest. At the same time, when we had such a lead we’re very disappointed that the game has finished the way it has.

"I’d have to be very honest and say that in the second half there was only absolutely one team in it.”

Dublin manager Jim Gavin played down the result and said it could have been different had the Munster side taken more of their chance.

He said: “When we hit those patches we’re very good but when you’re playing a quality side like Cork, any lack of concentration, they’re going to punish us and they certainly did that in the first half.

“They had a few opportunities to do that in the second half as well to do so as well and they didn’t take them. It might have been a different result.”

Dublin will face Derry in the Allianz Football League final at Croke Park on 27 April at 4pm. 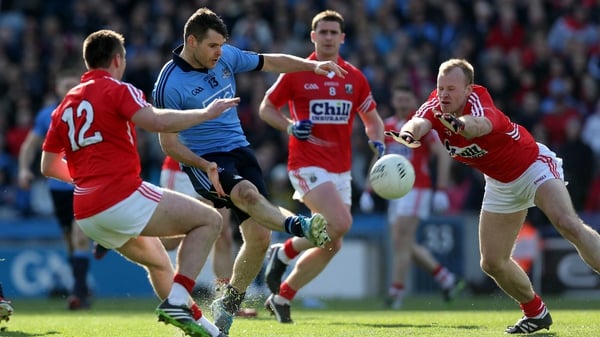