Mark Lynch led by example with 1-08, as Derry claimed a 1-16 to 0-13 win over reigning All-Ireland Champions Dublin on home soil at Celtic Park in their Allianz Football League Division a clash on Sunday.

The Oak Leafers captain was absolutely immense, with 1-04 of his tally coming from play, in a game which saw the sides tied on six times inside the opening 29 minutes, but once Lynch netted the lone goal of the contest, Derry wouldn’t trail in this game.

6,212 spectators watched as Dublin playing their first game in Derry in 20 years came under huge pressure throughout, to succumb to their second league defeat of the current campaign.

Kilrea brothers James and Charlie Kielt were both ruled out from the Derry panel due to flu, while manager Brian McIver made one change to the starting line-up, with Emmett McGuckin absent due to a hamstring injury, and Declan Mullen taking up a starting berth.

Both sides made a lightning start to this game, with no more than two points separating the teams inside the opening 29 minutes.

That trio of scores handed the home side a 0-03 to 0-01 lead after nine minutes, before the Dubs levelled the tie following points from Brogan and Paul Hudson.

Lynch and Cailean O’Boyle restored Derry'stwo-point lead, before the visitors bagged three scores in a row, to move 0-06 to 0-05 ahead after 24 minutes.

However, McIver's side made a swift response, following points from Lynch and Fergal Doherty, but a Brogan effort tied the game at 0-08 apiece after 29 minutes.

Indeed Jim Gavin's side were unlucky not to have a goal at this stage, after Derry keeper Thomas Mallon pulled off a wonder from a Davy Byrne goal shot.

However the Oakleaders made a decisive burst before the break, with Lynch leading the charge, firing 1-01 inside two minutes to hand the hosts a four-point lead.

Brogan responded with his fourth point, but Derry continued to work hard, with legitimate penalty calls after O’Boyle was dragged back by Sean George going unheeded by referee Fergal Kelly, but Ciaran McFaul managed a point on the follow-up to hand them a 1-10 to 0-09 interval lead.

The victors moved six points clear inside six minutes of the restart, but a trio of scores, including two from Brogan ensured a 1-12 to 0-12 scoreline at the end of the third quarter.

Both sides were reduced to 14 men, following the dismissal of Dublin’s Philly McMahon and Derry’s Mark Craig in separate incidents 13 minutes from the end, and despite Dublin’s late pressure, the hosts held firm with late points from Lynch and Benny Heron. 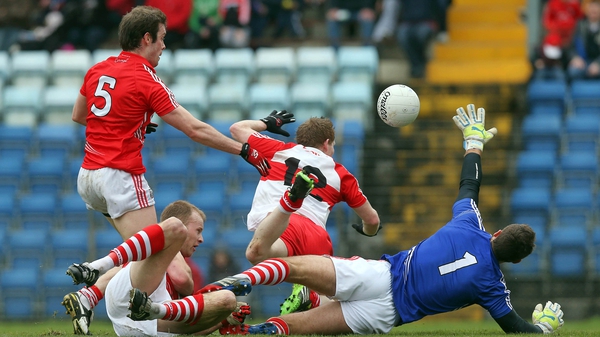