London footballers stand 70 minutes away from a first Connacht final appearance when they travel to Carrick-on-Shannon on Sunday.

Mayo await in the provincial decider, and while James Horan’s side are the warm favourites to retain their crown, an intriguing clash is in store as the Exiles target another scalp this summer.

Their victory over Sligo on 26 May was well deserved, even though they tired in the home stretch and benefitted from the Yeats County’s inability to convert some chances that would have taken the game to extra time.

Yet London showed enough in Ruislip to suggest they can trouble Leitrim, with Lorcan Mulvey, Paul Gottsche and Cathal McGee set to lead the scoring charge.

Their good start against Sligo laid the foundations for that famous win, and something similar will be needed in Carrick to silence what will be an enthusiastic home support.

Once the draw was made last October, Leitrim would have set their sights on making a Connacht final.

You couldn’t read too much into their facile win over New York on 5 May. After that came the bombshell that four players, including Wayne McKeon and Tomas Beirne, were dropped from the squad for disciplinary reasons.

Management were swift in making the call and it would appear that the camp are now united and focused on the London challenge.

Emlyn Mulligan, one of the best forwards in the country, is Leitrim’s standout player and it will be interesting to see how the visitors curb his influence.

After the culling of the quartet, the home side show five changes from the side that took the field at Gaelic Park.

Ciaran Egan, at No 3 and Enda Williams and the experienced Barry Prior in the half-back line, are part of a new look defence.

Brendan Brennan from the Melvin Gales club comes in to partner Darren Sweeney at midfield and in attack Paddy McGowan will start at wing forward.

London welcome back former Galway player Paul Geraghty into the full-forward line, while Philip Butler replaces Kevin Lynam at No 2.

Leitrim, with home advantage, will have the weight of expectancy on their shoulders, with some supporters probably looking ahead to a date with Mayo.

As referred to earlier, Paul Coggins’ side will look for a positive start so as to ask questions of their opponents early on.

Victory for either side will guarantee action in the Championship until the end of July.

There is a lot at stake – Leitrim edged out London with late scores in their Championship encounter last year.

Don’t be surprised if a similar denouement awaits us come 5.00pm on Sunday. 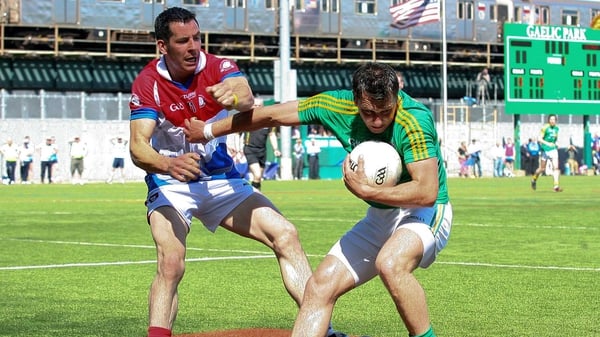