Donegal manager Jim McGuinness has given his backing to Patrick McBrearty following comments made by GAA president Liam O'Neill regarding the recent disciplinary action against Kevin O'Brien for an alleged bite.

A proposed three-match ban for the Dublin player by the Central Competitions Control Committee, arising from an alleged biting incident involving McBrearty in a league match last month, was revoked by the Central Hearings Committee.

McBrearty, 19, didn't attend the hearing and the CHC decided the alleged biting offence was not proven.

O'Neill said he thought there was a certain level of disappointment with the case, adding that it had left people who acted in good faith with an outcome that wasn't satisfactory.

McGuinness said: "Patrick is the victim in this situation. I don't think he should have been dragged through the media for a week or ten days, having been the victim.

"I suppose the president of the association has come out and made comments on it, but as you know he's a schoolteacher himself, and he should understand, I feel, that Patrick is a very young boy, he's only turned 19.

"And Patrick gave a statement, and the photographs went through to Croke Park, and the county board and everybody involved with Donegal cooperated fully with that.

"And I would stand by him on that."

McGuinness was also vexed by the fact that it would appear the CHC were blaming McBrearty for not appearing at the hearing, and that for this reason O'Brien's ban was not upheld.

"He was bit, and was a victim of that bite.

"To point a finger and say that it was Patrick's fault on the back of that - I think it's wrong.

"I didn't come out and say anything about it because we'd lost the match, and I think if you talk after you lose matches it's sour grapes" - Jim McGuinness

"I didn't come out and say anything about it because we'd lost the match, and I think if you talk after you lose matches it's sour grapes.

"But that was our situation, and a lot of people have said it was handled wrong. But that's the facts of the matter.

"I think people should back off Patrick now and let him get on with his football. As I said, he's a very young boy and he's a very quiet lad.

"You can't push people into situations and you have to respect their own opinions at the end of the day and it didn't happen in this situation, and on top of that the finger was pointed at him.

"Hopefully now he can re-focus on his football and focus on Tyrone, because he is a very good talent."

RTÉ’s GAA Championship Preview Special with a host of guests and a live audience on Sunday Sport from 14:00 on Sunday 19 May on RTÉ Radio 1. 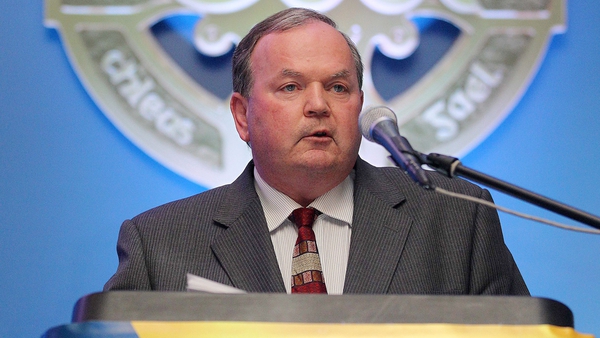