St Brigid’s goalkeeper Shane Curran paid tribute to Crossmaglen after seeing his side dash the Armagh team’s three in a row dream.

The Roscommon side reached the All-Ireland Club SFC final after a 2-07 to 1-09 win over the reigning champions in Mullingar and Curran was quick to praise Tony McEntee’s men, the 2011 and 2012 winners.

“They are one of the greatest teams of all time, inter-county or club team,” Curran told RTÉ Sport.

“I think Joe Brolly may have said that they were going to have a real All-Ireland final between themselves and Donegal so that’s probably a motivational tool for us. But you can’t take away from Crossmaglen, they’re just a magnificent club side.

“To be on the pitch today and beat them in an All-Ireland semi-final is an honour for us as footballers.”

“They are one of the greatest teams of all time, inter-county or club" - Shane Curran

St Brigid’s were trailing by a point with time running out before Conor McHugh found the back of the net after Frankie Dolan’s scuffed shot found its way to the substitute.

Curran said he had full confidence in Dolan to make a difference.

He said: “Frankie is still a ‘fox in the box’, he’s just a magnificent player. He had a hand in the two goals. He’s just instrumental for us, all the young players look to him.”

Just after that goal, Crossmaglen were reduced to 14 men when Kyle Carragher was red-carded for an incident involving Curran. The stopper said he didn’t remember much about it.

“We got the goal and it’s an emotional time when you get a goal in the dying minutes of a match and as I was going back I think I might have run into a lad’s hand.

"I don’t know whether he meant it or not but it certainly connected with a rather big nose anyhow. I didn’t even see him being sent off, I was in the ground,” said the 41-year-old.

He said: “I just met my wife on the field and she was crying, my dad and my two kids, all the people from Brideswell and Kiltoom and Cam, you see what it means to them and to us.

"At the end of the day we’ve won a game, a titanic battle and we have one more fence to jump and it’s going to be a battle as well.” 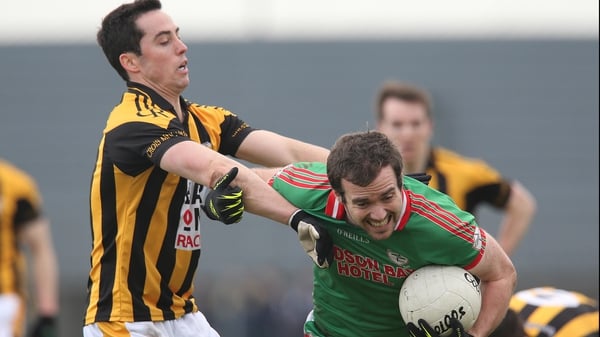 As it Happened: Saturday's GAA Club football and hurling semi-finals