Tyrone made it two wins from two with a 1-12 to 1-11 defeat of Mayo at McHale Park after Stephen O’Neill’s stoppage time penalty sealed a narrow success.

Jason Doherty bagged three Mayo points, but two each from Peter Harte and goalkeeper Niall Morgan helped Tyrone to a 0-6 to 0-4 interval lead.

Keith Higgins blasted in a late goal, but there was still time for the Red Hands to steal it.

Mayo made the early running, and eased ahead when Jason Doherty converted a free, and sent Lee Keegan away for a wonderful finish from wide on the left.

Tyrone struggled to get any fluency going, but once Conor Clarke and Sean Cavanagh began to challenge the O’Shea brothers for midfield supremacy, they moved with greater confidence and purpose.

Peter Harte’s playmaking was another huge Red Hand asset, allied with his ability to take a score.

Harte opened his side’s account in the 13th minute,, and added another with the fist to tie it up at 0-3 each after Cavanagh and Doherty had traded points.

Harte also had a hand in Stephen O’Neill’s point that gave the visiting side the lead for the first time in the 20th minute.

And while Doherty brought his tally to three with another free, the Ulster men finished the half strongly, with goalkeeper Niall Morgan stepping up to stroke a couple of frees between the posts from 43 metres.

Tyrone led by 0-6 to 0-4 at the break, but were pegged back level early in the second half when Doherty and Kevin McLoughlin both converted frees.

Another McLoughlin free kept mayo ticking over, but they had failed to score from play in the second half, such was the tenacity of the tackling they faced.

Tyrone, on the other hand, continued to find the range from open play, with Conor McAliskey and Cavanagh both firing over excellent efforts. 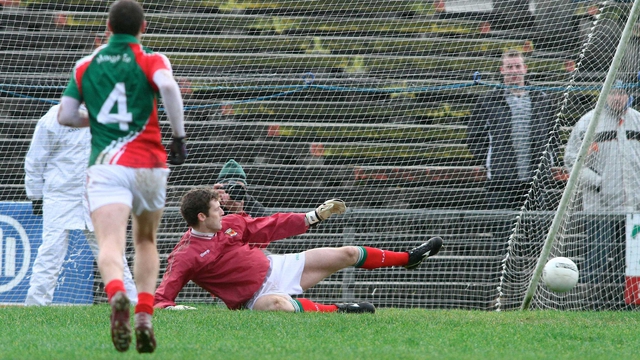 But it all changed in the final 10 minutes, with the westerners driving forward, Aidan O’Shea and substitutes Donal Vaughan and Alan Dillon making huge impacts.

Doherty sent Keith Higgins in to blast home a 67th minute goal, and two Doherty frees had them ahead by two.

However, there was still more left in Tyrone, and when Mark Donnelly was hauled down, O’Neill stepped up to slot the 75th minute penalty past David Clarke.

Subs: B Moran for S O’Shea, A Dillion for Barrett, E Varley for Freeman, D Vaughan 0-01 for Boyle