James O’Donoghue grabbed a Kingdom goal on 17 minutes, but five Jason Doherty points had the sides level on 0-09 to 1-06 at the break.

But Kerry were reduced to 14-men following the double yellow card dismissal of Anthony Maher, they failed to score in the second half, and Mayo closed the game out with scores from Kevin McLoughlin and sub Enda Varley.

Referee Padraig Hughes handed out 10 yellow cards and one red during a highly competitive encounter, which ended in a conclusive success for James Horan’s side.

Mayo, displaying superior energy and workrate, had opened up a 0-04 to 0-01 lead by the 12th minute, all of their scores coming from full-forward Jason Doherty.

He opened the scoring with a tidy effort from play, and drilled three frees between the posts.

Despite the considerable efforts of Johnny Buckley, the O’Shea brothers, Aidan and Seamus, gave the Connacht side an edge at midfield, but the Kingdom suddenly sprang to life at the end of the first quarter following a sluggish opening.

Darran O’Sullivan produced a delightful piece of skill to send James O’Donoghue in on goal, but his shot was superbly saved by David Clarke.

O’Donoghue seized on to the rebound, but his second effort was deflected away for a ’45, which Buckley drilled between the posts.

But in the 17th minute, O’Donoghue did find the net at the third attempt, bursting between two defenders with an audacious dummy to rifle a shot home at the bottom corner, giving Clarke no chance.

Michael O’Donoghue and O’Sullivan found the target to keep Eamonn Fitzmaurice’s side ahead until the closing 10 minutes of the half, when Michael Conroy steered over two wonderful points in the space of a minute.

The sides were level on four occasions as Anthony Maher, with a long range effort, and Conor Cox traded points with Doherty and Kevin McLoughlin. 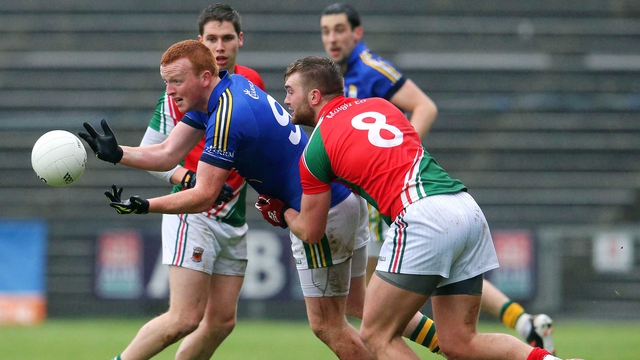 They were deadlocked on 0-09 to 1-06 at the interval, and Kerry found themselves under pressure once more at the beginning of the second half, coughing up frees which were punished by McLoughlin and Doherty.

And the Munster men suffered a blow in the 49th minute when midfielder Maher walked after picking up a second yellow card.

And in a scrappy and fractious 16-minute spell which produced a rash of bookings, and not a single score, the 14-man Kingdom held their own, until Conroy launched his third score of the afternoon to get the westerners going again.

Mayo full-back Ger Cafferkey repeatedly frustrated Kerry’s attacking efforts, and they were unable to break down a tenacious Mayo attack.

And the home side saw off their opponents with a late flourish which saw Enda Varley come off the bench to shoot a couple of points.