Tyrone, Down, Monaghan and Fermanagh are all through to the semi-finals of the Power NI Dr McKenna Cup.

UUJ had stood toe-to-toe with Tyrone for most of the first half, but a late flourish saw Mickey Harte’s men take a five-point lead at the break, helped by 1-03 from Sean Cavanagh.

The Red Hands were able to move through the gears in the second half, restricting the students to just two Richard Donnelly scores while adding nine points of their own to finish 1-18 to 0-09 winners.

Down are also through to the semi-finals where they will meet Monaghan.

Kevin McKernon’s goal gave Down a 1-07 to 0-04 half-time lead and Paul McComiskey’s second-half three-pointer saw them over the line by four points.

Elsewhere, Monaghan saw off Fermanagh in Inniskeen although both qualify for the semi-finals.

The Farney County continued their dominance in the second half and Dermot Malone’s goal saw the game finish 1-12 to 0-07.

All-Ireland champions Donegal, already out of the honours race, were given a scare by St Mary’s Belfast and trailed by one at the break.

Having suffered defeats to Fermanagh and Monaghan earlier in the competition, they rallied to record a win by the narrowest of margins in Páirc MacCumhaill, 1-14 to 2-10.

In the last game of the night Antrim blew an eight-point lead against Derry.

Meanwhile, in section B of the FBD Connacht League Mayo had a comfortable win over GMIT in Ballinrobe.

Points from Alan Freeman (5) and Lee Keegan, and a Richie Feeney goal helped the All-Ireland finalists into a 10-point lead at the break, 1-09 to 0-02.

It was a similar story after the pause with Conor O’Shea scoring an early goal and James Horan’s men eased to a 2-14 to 0-06 win. 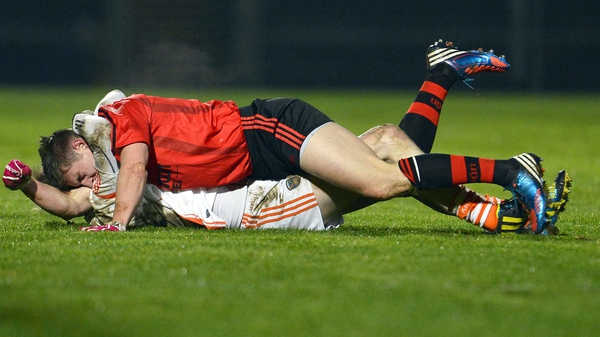 As It Happened: McKenna Cup and FBD updates