Derry jumped to the top of the Allianz NFL Division 1 standings by out-classing Kildare in an 11-point victory at Celtic Park tonight.

Mark Lynch's goal from close range after only 90 seconds set the hosts up for a 1-10 to 0-04 half-time lead, with Kildare's John Doyle pointing twice just before the break.

James Kavanagh and Morgan O'Flaherty helped the Lilywhites cut the gap to six points but there was no denying Derry, who boast a better scoring average than Galway and Donegal, their chief rivals in the table.

Kildare manager Kieran McGeeney will relive Derry's early goal in his nightmares as his defence was caught badly off guard.

A sweeping move, with James Conway and Enda Muldoon involved, was finished clinically to the visitors' net by wing-forward Lynch.

Derry, playing some excellent football considering the conditions, piled on the pressure with Bradley (0-02) and Conleith Gilligan tagging on points.

Backed by a decent wind, the Ulstermen led by 1-06 to 0-01 midway through the first half, with Kildare only opening their account in the 16th-minute through James Kavanagh.

Derry continued to take the game to the visitors, with former dual player Liam Hinphey, who has decided to concentrate on football for the moment, and Conway adding their names to the scoresheet.

Incredibly, there was 12 points between the sides in the 24th-minute, with the evasive Bradley boosting his personal tally to five points.

McGeeney then changed his midfield by bringing Darryl Flynn in for Niall Browne and the switch seemed to work as Kildare nabbed three points in-a-row before the half's end.

Michael Conway kicked a '45' and then Doyle fired two frees between the uprights to just about keep Kildare alive.

The visitors tagged on three further points on the restart through Kavanagh, hard-working corner-back O'Flaherty and Doyle again.

However, that was as good as it got for McGeeney's charges as they could only add one more point despite playing with a wind advantage in the second half.

It came around the hour mark when Doyle raised the white flags with a 20-metre free. It was the Lilywhites' first score for 20 minutes and Derry were simply out of sight by then.

Eoin Bradley livened up their attack as a second half substitute. Muldoon and Bradley, who kicked three successive points to get Derry back on track, both took their scores well as Paddy Crozier's men put memories of their recent defeat to Kerry to bed. 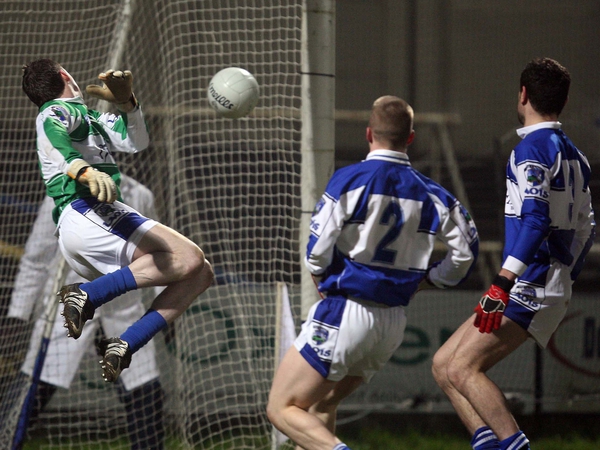