Kerry are Bank of Ireland All-Ireland senior football champions for the 34th time with a facile 4-15 to 3-05 win over Mayo in Croke Park.

74 mins: The final whistle blows on a game that was finished a long time ago. Kerry pick up their 34th All-Ireland, and they will hardly have won an easier one.

72 mins: Four minutes are to be added on to this time and a jaded Mayo backline as a ruthless Eoin Brosnan gets his thirteenth goal in championship football.
KERRY 4-15 MAYO 3-04

71 mins: Aidan O'Mahony is replaced by Brendan Guiney for Kerry.

67 mins: Tommy Griffin is replaced by Eamon Fitzmaurice for Kerry.

66 mins: Mayo fans begin to stream out of the ground. Yet another bitterly disappointing day on Jones' Road. Most of them fail to see Conor Mortimer's free kick split the uprights.
KERRY 3-13 MAYO 3-04

63 mins: Mike Frank Russell gets an ovation as he leaves, replaced by Bryan Sheehan. Sheehan points from a free with his first kick.
KERRY 3-13 MAYO 3-03

60 mins: Aidan Higgins gets a yellow card after another bit of unrest on the pitch.

59 mins: Another fight breaks out, and Cooper finds himself in the middle of it again. Galvin gets a yellow card. Meanwhile, the injured Peadar Gardiner is replaced by Paddy Moran.

55 mins: Conor Mortimer points a free after his brother Trevor won the ball from Paul Galvin. It's Mayo's first score of the half.
KERRY 3-11 MAYO 3-03

47 mins: Brosnan kicks only the second point of the half after Mayo surrender the ball in their own back lines.
KERRY 3-10 MAYO 3-02

47 mins: The game has slowed down considerably. Worryingly for Mayo, Ciaran McDonald seems to be holding his hamstring, which was the source of great concern before the game.

42 mins: A fight breaks out when Donaghy strikes David Brady after Aidan Higgins shoulders Gooch Cooper in the face. Donaghy and Brady get yellow cards. Higgins is lucky to be on the pitch.

38 mins: Mayo are raining shots down on the Kerry goal, looking to unsettle the Kerry backs.

37 mins: Gooch Cooper opens the scores for the second half with a confident kick.
KERRY 3-09 MAYO 3-02

35 mins: Tomás Ó Sé is replaced by Eoin Brosnan on the Kerry side and immediately Brosnan attempts to score, his shot coming off the bar.

36 mins: Mayo score a second goal. A long ball comes off the post from McDonnell's shot and Kevin O'Neill slams it home.
The West is awake!
KERRY 3-07 MAYO 3-02

34 mins: With half-time looming, Mayo cruise through the Kerry backs with ease and Kevin O'Neill passed off to Pat Harte who goaled.
KERRY 3-07 MAYO 2-02

31 mins: Kerry are racing around statues, and Seamus Moynihan finds himself on the end of a sweeping move. A point results.
KERRY 3-07 MAYO 1-01

30 mins: Kevin O'Neill's strike turns in dangerously towards Kerry 'keeper Diarmuid Murphy, but it inspires only brief excitement, as no Mayo forwards are near the ball. Kerry deal comfortably with it.

28 mins: The game is all but over. Colm 'Gooch' Cooper finds himself one-on-one with the 'keeper and his ball hops off the outside of the right upright. He has enough time - and is never tackled - when he collects and slots it home for a goal.
KERRY 3-06 MAYO 1-01

24 mins: Darragh Ó Sé drives his ball wide, but Mayo are struggling to withstand wave after wave of Kerry attack.

21 mins: Galvin pops it over from close range, having found more gaps in the Mayo back lines.
KERRY 2-05 MAYO 1-00

19 mins: Mayo have tightened up at the back and Sean Sullivan is forced to try one from way out, driving it wide. It's only Kerry's second wide.

17 mins: Suddenly Mayo are awake and an incisive attack sees Kevin O'Neill sidefoot sweetly over Murphy and into the Kerry net.
KERRY 2-04 MAYO 1-00

15 mins: Brady seems to have pushed Donaghy in the back as they both went for a high ball.

12 mins: James Nallen goes off for David Brady, who goes back to mark Kieran Donaghy.

10 mins: With the Kerry defenders backing off, Mayo's Aidan Higgins spurns the chance of a morale-boosting point by blasting it well wide.

8 mins: Donaghy is the most dangerous man for Kerry as he fields well, fights off Mayo backs and sticks the ball in the net for the second Kerry goal in a minute.
KERRY 2-02 MAYO 0-00

7 mins: Kerry, with consumate ease, tear open the Mayo defence and Declan O'Sullivan uses Kieran Donaghy for a one-two before blasting to the net.
KERRY 1-02 MAYO 0-00

4 mins: A quick free by Mayo catches Kerry off guard and Diarmuid Murphy has to save smartly from the onrushing Kevin O'Neill.

3 mins: Kerry have started the brighter; as gaps open up in the Mayo defence, Paul Galvin's wayward shot goes wide.

1 min: It's a fine, sunny day in Croke Park. The pitch is lush and flat and there is no breeze to speak of. 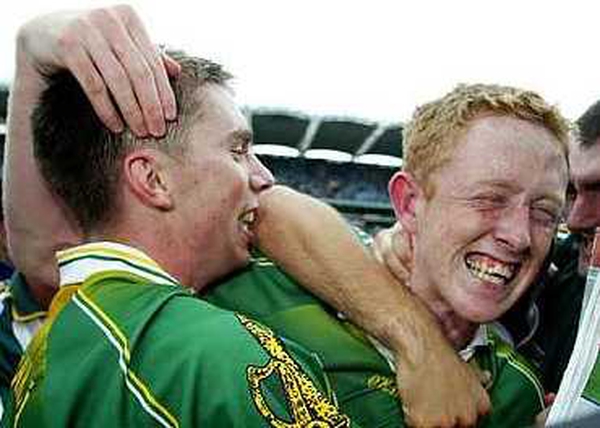