Mayo came through an epic All-Ireland semi-final to book a date with Kerry in the final as they defeated Dublin by 1-16 to 2-12 at Croke Park this afternoon.

The fight for the psychological edge started early as Mayo began their warm-up in front of the masses of Dublin fans on Hill 16. Dublin emerged from the dressing rooms and walked through the Mayo players to salute their fans on the terrace and the sides and selectors squared up to each other before the temperature cooled and the warm-up continued.

Both sides began cautiously and the first score came after Mortimer got loose on four minutes and curled the ball over the crossbar.

Mayo were on top in midfield and set up Mortimer for a great goal chance but he inexplicably shot wide from ten yards. Conal Keaney then won a free that he opted to take himself.

However, his shot dropped short and spun loose but, to the Mayo's good fortune, avoided the attacking players and went over the line for a '45.

Tomas Quinn struck the post from the placed ball and Mayo fouled as they broke loose and Quinn was again inaccurate with his effort before missing another within minutes.

The impressive Ronan McGarrity got involved in everything early on and forced a sideline ball which Ciaran McDonald fired over magnificently to double Mayo's lead. At that stage, the Dublin midfield were at a loss as to how they could limit his influence.

Alan Dillon added another point, under pressure from the Dublin defence, moments later and Jason Sherlock received a yellow card for a high challenge on Ger Brady – but McDonald shot wide from the resultant free.

McDonald forced Barry Cahill into conceding another free which Conor Mortimer hit short. Dublin's Barry Cahill hit his clearance to Mayo and Alan Dillon flicked the ball over the bar, but it could as easily have hit the back of Stephen Cluxton's net.

The Dublin forwards had been unable to find their range until Conal Keaney opened their account on 18 minutes.

Ciaran Whelan was fortunate to escape with a yellow card when he appeared to punch Ronan McGarrity as the Mayo man fielded a high ball. McGarrity was clearly shaken by the incident and continued for ten minutes before eventually leaving the field.

Ger Brady added to the torment of the Dublin defence when he received a Conor Mortimer handpass and sliced the ball over for another point. Ray Cosgrove responded with a Dublin point to leave three between the sides.

Dublin added their second goal minutes later when Alan Brogan then broke free from the attention of the Mayo defence and forced a great save from Mayo 'keeper David Clarke but the rebound fell to Keaney who blasted home from a yard to leave matters level. Cosgrove gave Dublin the lead as he pointed off the end of fine run by Shane Ryan.

Alan Higgins came up from defence to respond for Mayo after Ciaran Whelan was replaced by Darren Magee and Kevin Bonner's place was taken by Declan Lally on 23 minutes.

Conal Keaney had a gilt-edged chance for a goal when he was one-on-one with Clarke but he opted to fist the ball over the bar. Jason Sherlock rounded the Mayo defence seconds later and his shot struck the crossbar and out to safety.

From the counter-attack, Mayo carved open the Dublin defence and Conor Mortimer selfishly shot over the bar himself when he had Dillon inside with an open goal beckoning.

With goal chances at a premium, Conal Keaney saw his effort obstructed as Alan Higgins dived in to deflect the ball with his head, leaving the Dubs with a '45. Quinn converted the placed ball.

Kevin O'Neill came on a substitute and immediately made an impression as he levelled for the Connacht side. Mortimer gave them a one-point 1-05 to 0-09 lead at half-time.

Ciaran Whelan and Kevin Bonner returned to the pitch for the second half and Alan Brogan scored the first point of the half after a minute.

The Dublin attack combined well to set up Jason Sherlock with an open goal and he flicked the ball over the line to give the Dubs the best possible start to the second half. Brogan added two more in a matter of minutes.

Mickey Moran sent on the experienced David Brady in place of Billy Joe Padden as Mayo sought to prevent Dublin racing away.

Alan Higgins brought down Quinn, who was through on goal, and Mayo conceded another point from the placed ball.

Mayo scored their first of the second half, after eight minutes, as Mortimer curled the ball over sweetly. Kevin Bonner added another for Dublin following good work by Brogan who was clearly giving Alan Higgins a torrid time.

Keaney then showed resilience to hold off three Mayo players and take his point with his fist in front of the Canal End. Ger Brady responded with a long-range effort, while Dillon added his third point soon after to leave five points between the sides.

Mayo were back on top and Andy Moran prospered from a magnificent Kevin O'Neill through-ball to score his first ever SFC goal and breathe new life into the Mayo effort with 20 mintues to play.

O'Neill reduced the deficit to the minimum before Dillon brought the sides level, for the sixth time, on 54 minutes.

With Mayo going from strength-to-strength, McDonald won a free on the left that allowed Mortimer give them the lead with 14 minutes left to play.

For the next ten minutes both sides had difficulty adding to their tally until Alan Brogan proved to be Mayo's tormentor once more when he levelled matters with a great point three minutes from the end.

David Heaney was immense in the closing stages, holding off his man and getting his fist to the ball first every time, in the face of pressure from the Dublin attackers.

Mark Vaughan entered the fray for Tomas Quinn and came within inches of giving Dublin the lead when he struck the post and Mayo went straight back up the pitch where McDonald gave his side the advantage once more.

Heaney then expertly defended a high ball but conceded a '45 to give Vaughan the chance to level it, but Clarke leaped to punch the ball clear and Mayo cruised away.

Dublin won another free to give Vaughan a second chance but he fluffed it and Paul Caffrey was left to regret withdrawing Tomas Quinn from the action early as Mayo go forward to meet Kerry in next month's decider. 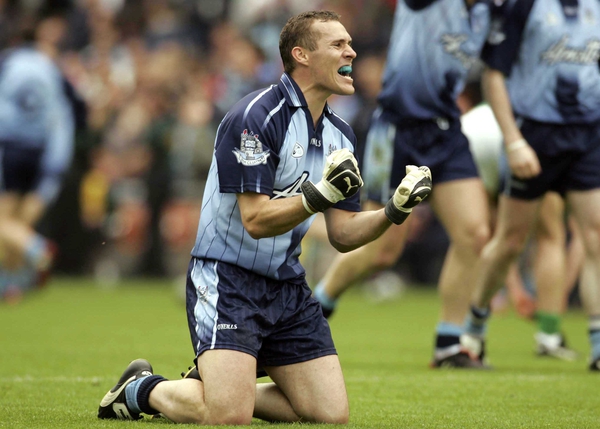