Dublin were rarely tested at a packed out Croke Park as they won through to their first All-Ireland SFC semi-final since 2002, beating Westmeath by 1-12 to 0-05.

Paul Caffrey's side hit 16 wides but could afford to do so as Westmeath's championship charge came to a grounding halt at headquarters.

Westmeath, lining out in their sixth game this summer, never played to their potential or were allowed to as the men from the capital, with corner-back Paul Griffin putting on an exhibition of blocking play.

The telling blow came on 13 minutes when Mossie Quinn claimed the ball after a Conal Keaney point shot had struck the post, and with defender Francis Boyle slipping, Quinn shot home past Gary Connaughton for the only goal.

Westmeath's shooting was abysmal in the first half with only corner-forwards John Connellan and Dessie Dolan scoring as they trailed by 1-07 to 0-02 at the break.

A rather listless second half saw many of the 80,000 spectators head for the exits early but not before witnessing Dublin's best forward Alan Brogan bring his personally tally to 0-04.

Despite the return of David O'Shaughnessy to Westmeath's midfield, they struggled in that sector in the first half. Ciaran Whelan and Shane Ryan were in dominant form and ably assisted by roaming full-forward Kevin Bonner, who shuttled back to centre-field on numerous occasions as a third midfielder.

With a slight breeze behind him, Quinn opened the scoring in the  sixth-minute and Brogan added a point from play, when he popped up on the left wing in the ninth-minute.

After a series of wides, with team captain Dolan particularly off-key, Westmeath looked to have settled when Dolan spotted teenager Connellan in space and the minor star dinked over for his side's first point – 11 minutes in.

But Tomas O'Flatharta's men could only add one other point in the entire first half – from a Dolan free – as the Dubs stamped their authority all over the game.

It was hard to know if there was any fight left in Westmeath, whose energy levels must have been sapped by Dublin's tigerish defending and almost obsessive work rate, as they were soon eight points in arrears.

Quinn's goal, which he side-footed home from the left edge of the square, moved Dublin 1-02 to 0-01 ahead and they never looked back. Midfielder Ryan showed immense power to shrug off Donal O'Donoghue's challenge and fist over on 16 minutes.

After Dolan's free, points from Jason Sherlock, Ray Cosgrove, Brogan and Conal Keaney ran Dublin's total up to 1-07 and the game was effectively over such was their iron grip on proceedings.

In their interchangeable forward lines, Sherlock was perhaps Dublin's liveliest attacker - his intelligent running adds much to their game. Yet the 1995 All-Ireland winner should have netted three minutes before the break when he beat Damien Healy to a low ball in from Brogan, and swung it onto his left boot, but his shot just spun wide of the right post.

Other goal opportunities had come Dublin's way – just before his strike, Quinn had an even better chance to convert but the ginger-topped Connaughton caught out the St Vincent's man, popping the ball out of his reach as he tried to round him in the tenth-minute.

Keaney, who finished with a wides tally of five, was also guilty of missing out on a major in the first half as he pulled a shot wide of Connaughton.

However, with Brogan stretching the Dubs' lead to nine points early in the second half, Caffrey would not have been too perturbed. Little did he know that it would take his players another 21 minutes to manufacture a score as the game went into the doldrums.

It was effectively a shut-out at both ends of the ground as only Michael Ennis and Dennis Glennon scored between the 38th and 59th minutes.

Those points did raise the hopes of the Westmeath hordes but it was goals they desperately craved and Gary Dolan, their saviour in their qualifier wins against Sligo and Galway, sent their best chance wide under pressure from man-of-the-match Bryan Cullen.

Griffin and Cullen were the two shining lights at the back for Dublin as they won their individual battles hands down. Disappointingly, the Dublin forwards let their performance levels slip in the closing stages with Quinn and Keaney hitting a number of wides.

The duo did end that barren spell with a free each on the hour mark, taking Dublin 1-10 to 0-04 clear. Substitute Darren Magee, who had come on for Whelan, and Brogan added points from play to top off the success, with only John Smyth, who had been sprung from the Westmeath bench, able to reply.

The Dubs' tenth win in 13 championship meetings with the midlanders was tainted when word came through that Whelan was taken off complaining of blurred vision – just one worry on an otherwise trouble-free day for Caffrey and company. 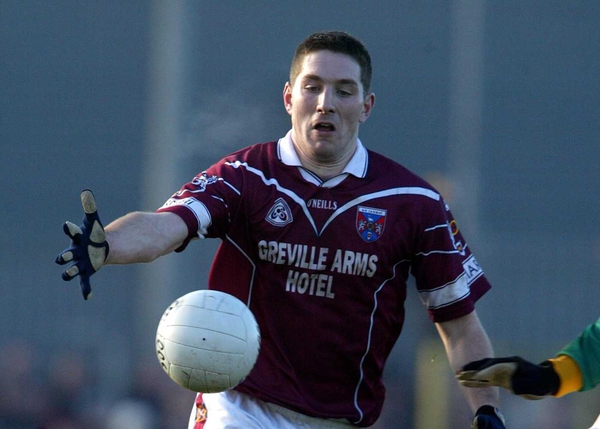