Despite hitting 14 wides, Laois still had enough quality to see off their Leinster rivals Offaly 1-09 to 0-04 in the fourth round of the All-Ireland SFC qualifiers in Portlaoise.

At a wind-beaten O'Moore Park, Laois upped the ante in the second half with substitute Padraig Clancy slamming home a 60th-minute goal.

Early on, Mick O'Dwyer's side looked a long way from booking an All-Ireland SFC quarter-final against Mayo but they still led 0-05 to 0-03 at the interval, although 'keeper Fergal Byron had blazed a penalty over the Offaly bar.

Tellingly, it took Offaly 24 minutes of the second half to add to their tally through Ciaran McManus (0-03) as Laois thundered through.

In the sides' sixth Championship clash since 2001 – there were two wins for Laois, two for Offaly and a draw in recent years – Offaly were first out of the traps with Colm Quinn pointing after only 20 seconds.

Backed by a gusty gale, Laois notched up three wides in the opening six minutes, and it took an eighth-minute free from Ross Munnelly to finally open their account in front of a 16,800-strong crowd.

McManus replied with a lengthy free and with a quarter of an hour gone, Offaly led 0-02 to 0-01 as a guilty-looking Munnelly took his own wides tally to three.

The standard of football was poor and little changed when young Laois midfielder Brendan Quigley missed an open goal and Thomas Deehan, who was shackled well throughout by the tireless Joe Higgins, missed out on a point-scoring chance for Offaly.

The Faithfuls' dynamic duo of Deehan and Niall McNamee were also kept quiet throughout as the Laois defence had clearly done their homework.

After only 19 minutes, Mick O'Dwyer withdrew Noel Garvan from the action, introducing big Timahoe man Clancy who had been out of action since damaging his shoulder against Dublin last month.

Laois quickly levelled through Quigley and Chris Conway put them in front from a 27th-minute free, but not before Brian McCormack stuttered his lines and fisted wide with a clear sight on goal.

McManus and Quigley then swapped points and when Munnelly was brought crashing to the ground by Offaly stopper Padraig Kelly in the final minute of the half, there was only one outcome – a penalty.

Byron stepped forward to face his fellow goalkeeper but got under his kick and it rose over the bar, much to the Laois man’s chagrin, to leave the hosts 0-05 to 0-03 ahead at half-time.

It could have been a costly miss but Offaly were simply dismal after the break, fading out of the Championship showing little of the team spirit so evident in their Leinster wins over Westmeath, Kildare and Wexford.

'Beano' McDonald set up Munnelly for the second half's opening point, six minutes in. A Conway free pushed Laois 0-07 to 0-03 clear and O’Dwyer’s players had victory in sight.

McManus then ended a truly barren spell for the Faithfuls by walloping over a long range in his inimitable style. Yet Laois closed the door immediately when the marauding Tom Kelly and Munnelly combined to put Clancy through on goal and he rounded Padraig Kelly before planting the ball to the net. Game over.

An interception from the excellent Higgins began the move for Munnelly's third point, which pushed Laois 1-08 to 0-04 clear, and Conway matched him with a third of his own, a fine score from the right flank that had him kissing his crest in delight.

Mayo's management would have been taking note but which Laois side will turn up at Croke Park on August 13 is anyone's guess. 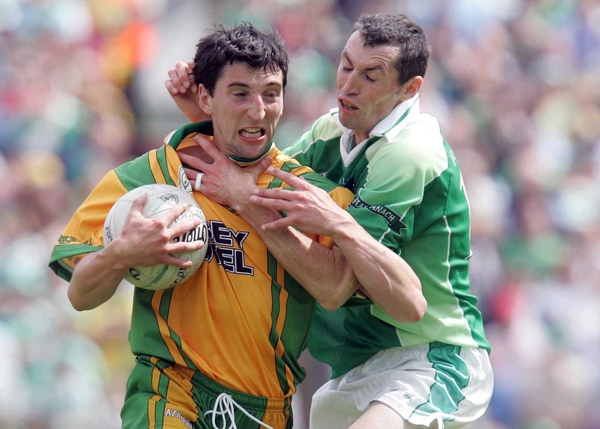 Donegal come through a scrappy affair