Dublin became the first team to retain the Leinster SFC title in 11 years as a commanding second half performance saw them out-muscle 14-man Offaly for a 1-15 to 0-09 victory at Croke Park.

A bustling crowd of 81,754 watched Jason Sherlock bring back memories of 1995 – he smashed home a late goal right in front of Hill 16 – and a confident Mossie Quinn tally up 0-07 as Paul Caffrey's side took advantage of the fading Faithfuls.

Offaly, still without a Leinster final win since 1997, deserved better – the twin threats of Niall McNamee and Thomas Deehan had them right in the mix at half-time.

The sides went in at the break tied at 0-06 apiece with McNamee and Deehan contributing 0-02 each. But the Dubs upped the gears for the early part of the second half, going on a six-point burst – Quinn grabbed four of those – to race into a 0-12 to 0-07 lead.

Offaly had midfielder Alan McNamee sent off in the 53rd-minute – he earned his second yellow card for a tangle with Ray Cosgrove – and the underdogs were left chasing the game for the remainder.

The first Dublin-Offaly final since 1983 sprung into life when Niall McNamee, already one of the stars of the championship, fired over a point in front of the Hill after barely 20 seconds.

Deehan rasped over a second within minutes and Offaly, on their fourth visit to GAA headquarters this summer, were looking sharp. However, the Dubs were unfortunate not to net in the third-minute when some neat inter-linking between Barry Cahill and Paul Casey gave Conal Keaney a sight of goal but his drilled shot cannoned back off the foot of the post.

Quinn was the villain of the piece when he missed an easy free and Offaly compounded the St Vincent's man's woes when a free was worked out for Alan McNamee to send over a skyscraper of a point.

It took 14 minutes for the Dublin attack to finally gel and when it did, the scores duly came. Keaney (free), Alan Brogan and Quinn bagged three points in the space of five minutes to level the game at 0-03 apiece.

Quinn and Niall McNamee, who was left wearing the number 33 shirt for the majority of the game after his original jersey was ripped, traded frees and while Dublin's Ciaran Whelan was excelling in midfield, Offaly’s direct style – pinging long diagonal balls into the corners – was still carving out scores for them.

Points from Deehan and McManus, who sent over a long, raking free from the left sideline to make up for some earlier misses, were cancelled out by Keaney and Quinn - yet the first half ended on a controversial note.

In injury-time a run forward by Offaly substitute Cathal Daly saw Dublin 'keeper Stephen Cluxton sprint out of his goal to meet him, and he took down the former All-Star with what looked like a professional foul. The Dublin defence was certainly stretched and Daly may have got in for a goal, but much to the Dubs' relief, referee Marty Duffy, whistling his first provincial final, dished out only a yellow card to Cluxton.

As if to rub salt into Offaly's wounds, Niall McNamee missed the resultant free and Dublin’s tails were evidently up.

The second half had only just thrown in when McNamee redeemed himself with an excellent score from the right flank. Four minutes later, Quinn levelled with his fourth of the afternoon and Caffrey's charges notched the next five points to move menacingly into a 0-12 to 0-07 lead.

Quinn hit the next three – two frees – with Whelan, Brogan and Sherlock beginning to pull the strings. Brogan ended the third quarter by slamming over his second and third points.

The contest was effectively over when the elder McNamee brother was sent to the line with 17 minutes remaining. McManus, now 30 years of age but as much of a force as he ever was in centre-field, reduced the deficit with a typically brilliant free from 40 metres out.

The sides then missed two goal chances as Offaly stopper Padraig Kelly brought off a good save at the feet of Quinn and at the other end, Cluxton deflected a stringing drive from Niall McNamee over the bar.

Brogan added his fourth point, Keaney reinforced the Dublin lead further and then came the clinching goal – a superb 60-yard pass from Whelan found Brogan and he laid off for Sherlock to rocket a shot past Kelly and bask in the celebrations in front of the heaving Hill.

Sherlock took his tally to 1-01 with a well-struck point and it was game over. Hard luck on a young Offaly side, they will come again, but for Caffrey's Dublin, the omens are good.

The last team to retain the Leinster – also Dublin in 1995 – went on to win the All-Ireland championship.

In a nice touch, Caffrey sprung Colin Moran, the Dublin captain for 2006, from his bench for his first appearance of this year's championship in the dying minutes. Darren Magee and Stephen O'Shaughnessy also made it onto the field to mark their returns from injury.

The 26-year-old Moran, who had been struggling with a groin injury since the winter, accepted the Delaney Cup alongside Bryan Cullen, who skippered the champions from the throw-in today. 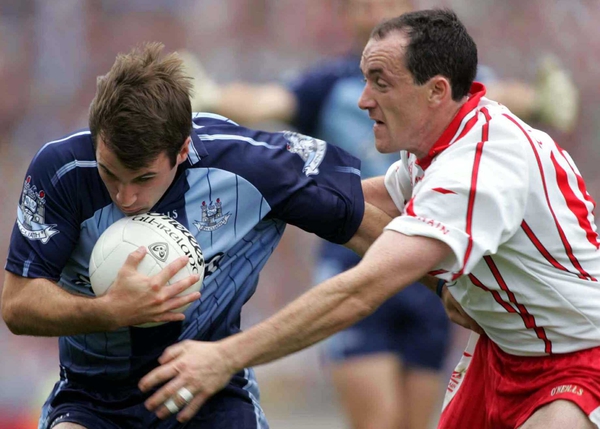