Armagh are Ulster football champions for 2005 having beaten Tyrone 0-13 to 0-11 in Croke Park after a scrappy affair that saw three players sent off in the second-half, including Peter Canavan, who had been on the pitch for less than a minute.

They became the first team to win an Ulster title after competing in the preliminary round since Cavan did so in 1945, with a two points win over Tyrone in a remarkable intense and fiercely contested replay.

Tyrone looked as if they were on their way to an 11th provincial title when they led by four points with 10 minutes to play, but the loss of Peter Canavan and Stephen O'Neill, both sent off in sensational fashion, saw their challenge crumble.

The Orchard men, who had Ciaran McKeever dismissed, showed tremendous character and heart to drive through for six late points to clinch the title.

Intrigue reigned throughout the first half, with several individual tactical plots unfolding, Armagh deploying Kieran McGeeney as a sweeper and Ciaran McKeever dropping back as an extra defender.

The ploy, designed to limit ball getting through to danger man Stephen O'Neill, worked to an extent, in that he failed to score from play.

But the Red Hands were able to produce scores from other areas, the first coming from half back Davy Harte inside the opening minute.

Armagh had come a poor second in terms of winning break ball in the middle third in the drawn game, but that was another issue which they addressed with success, wing backs Aaron Kernan and Aidan O'Rourke giving them the edge in that regard throughout the opening quarter.

Indeed, Tyrone failed to score again until the 20th minute, while in the meantime, the Orchard men tagged on points from Kernan, Ronan Clarke, Brian Mallon and an Oisin McConville free to lead by 0-04 to 0-01.

But the second quarter belonged to Tyrone, with Ryan McMenamin raiding from the corner back position, Brian McGuigan probing from deep and midfielder Sean Cavanagh running at the Armagh defence.

Ryan Mellon, a late replacement for the injured Peter Canavan, squeezed over from an acute angle to score, and McGuigan, Brian Dooher and O'Neil were all on target as the Red Hands eased ahead.

Kernan pulled back a point from a free, but Mickey Harte's side finished with another O'Neill free to lead by 0-07 to 0-05 at the break.

Two wonderful strikes from O'Neill stretched the advantage to four, before McConville and Clarke responded, but the Red Hands still held a four points advantage going into the final quarter after O'Neill and Martin Penrose had hit the target.

Canavan came in as a substitute at that point, but immediately became involved in a brawl, and was sent off on a straight red card, along with McKeever.

It was to get worse for Tyrone, who lost O'Neill to a second booking 10 minutes from the end, and Joe Kernan's side just grew stronger, driving forward in waves which their tiring opponents couldn't resist.

McDonnell, Clarke and substitute Paddy McKeever swept over points, and it was McConville who sealed it with two late strikes.

Subs: P McKeever (0-01) for B Mallon, A McCann for O'Rourke, T McEntee for Loughran 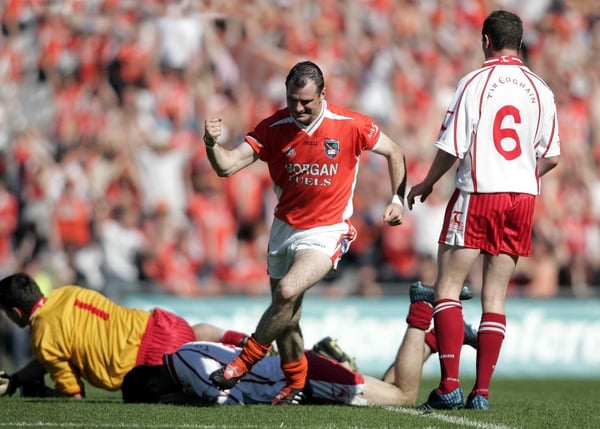