Inter Milan have reported that Christian Eriksen is "in excellent physical and mental shape" following a visit to the club's training complex.

The 29-year-old collapsed during the first half of his country's group match against Finland in Copenhagen in June.

He received emergency treatment on the field and later underwent a successful operation to have a heart-starter device fitted.

He had been recovering in Denmark but has now been able to visit his club in Italy.

A statement from Inter on Wednesday read: "This morning Christian Eriksen paid a visit to the Suning Training Centre in Appiano Gentile.

"The Danish midfielder met the club directors, the coach, team-mates and all of the staff present. Eriksen is doing well and is in excellent physical and mental shape.

"He will now follow the recovery programme put forward by Danish doctors in Copenhagen, who will also co-ordinate the clinical follow-up. The Inter medical staff will naturally be kept informed and up to date throughout the process."

Separately, Premier League referee Anthony Taylor insists he was no hero despite receiving widespread praise for his handling of Christian Eriksen's cardiac arrest at Euro 2020.

Taylor was in charge of the game when Eriksen collapsed during Denmark's group match against Finland in Copenhagen in June.

The English official immediately recognised the seriousness of the situation and stopped play straight away to call for urgent medical assistance.

His quick thinking helped save 29-year-old Eriksen's life, as did that of Denmark captain Simon Kjaer, who began to deliver emergency treatment before medics could reach the player.

Taylor said: "I was looking directly at Christian when he fell to the floor. I could see in his face the gravity of the situation.

"At the time there was no-one else near him. You could tell instantly by the way he fell - I was only 10 metres away from where he was - that something was seriously, seriously wrong.

"I would say, overall, that is the toughest situation I have had to deal with in my career.

"But the real heroes are the medics who treated him and also Simon Kjaer, the Danish captain, who helped him immediately.

"The only thing I did on that night was recognise Christian was in distress and needed immediate medical help." 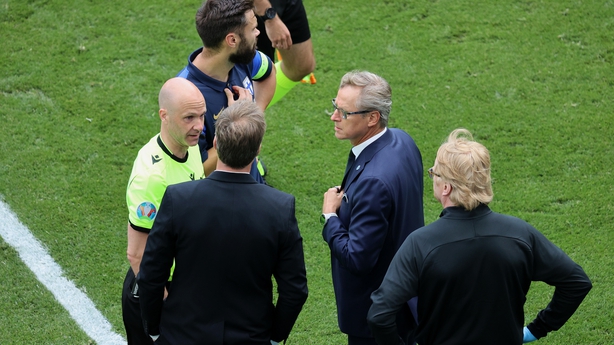 Taylor, 42, who has been refereeing in the English top flight since 2010, experienced emergency situations in his past work as a prison officer and had also encountered a similar issue three years ago.

He said: "Unfortunately I not only had that experience in the summer with Christian but also back in 2018, when I was refereeing Newcastle at Burnley, I had a colleague who suffered a sudden cardiac arrest in the changing room.

"So I've had a couple of experiences on behalf of the medical team where prompt action has saved somebody's life."

After Eriksen received attention, Taylor then took the lead in looking after the rest of the game's participants on a human level.

"As the referee, you end up becoming part of the crisis management process. There was very little time for me to feel how I was feeling.

"It was very important for me to stay focused and calm and try to show some form of leadership to people as is required in that situation.

"Of course it is a situation you don't want to be in and you wouldn't wish anybody to be in but we practised long and hard about staying calm and doing your job.

"It can be a highly-pressurised situation but when you aim to go and referee at a major international tournament you try to prepare to deal with all that."

Taylor was speaking at his local football club Altrincham, where a defibrillator has been installed with the support of the Premier League Defibrillator Fund.

The fund, which is open to grassroots facilities and clubs, was launched in the summer. Fabrice Muamba, the former Bolton midfielder who suffered a sudden cardiac arrest during a game in 2012, was also in attendance while emergency aid training was also provided.

Taylor said: "Having a defib unit here means that if someone does suffer a cardiac arrest, the facility is here to help them get through that and survive that. People need to understand the speed of reaction to someone suffering an arrest is so, so important.

"I'd encourage every club that is able to apply to submit that application and get one of these units installed."