Three Denmark fans were infected with the Delta coronavirus variant by attending the Euro 2020 match against Belgium, according to the Danish Agency for Patient Safety.

The agency also says there have been 29 cases of infection in connection with three European Championship matches on Danish soil.

The news comes just two days before Denmark are due to play Wales in a last-16 tie in Amsterdam – a game that Danish fans are able to attend but Welsh supporters are not.

The two nations are not on the Netherlands' safe country list but, for European Union and Schengen area residents, an exemption to the entry rules and the need to quarantine exists.

Denmark fans can avoid quarantine in the Netherlands by spending less than 12 hours in the country.

The same exemption does not apply to Wales supporters following the United Kingdom’s withdrawal from the EU.

Anette Lykke Petri, director of the Danish Agency for Patient Safety, said three fans who attended the Denmark v Belgium game at Copenhagen’s Parken Stadium on 17 June were infected independently of each other.

"The three infected people all independently point out that the place of infection has been the battle," Petri told Danish station TV 2 News.

"So somewhere there must be one or more sources of infection, and therefore we would like to have screened everyone."

Petri said the close contacts of the three infected individuals, as well as their close contacts, are in isolation and have been recommended to have a PCR test.

Supporters that saw the game in certain sections of the stadium have been invited to test but are not isolating.

Responding to the Danish Agency for Patient Safety’s comments, a UEFA spokesperson said: "The mitigation measures implemented in each of UEFA Euro 2020 host venues are closely following the regulations set out by the competent local authorities who are the ones responsible for the health and safety measures of their inhabitants.

"UEFA has set out a variety of guidance for their spectators, including a code of conduct that was requested to be agreed to by all ticket holders, before entering the stadium.

"The overall rates of positive results following the group stage of the Euro 2020 tournament are still marginally low and we are satisfied with the overall situation."

Finland sees spike in infections after fans return from Russia

Elsewhere, the Finnish authorities said nearly 100 infections have since been recorded at two border crossings with Russia, mostly among returning fans.

The Finnish national team suffered two defeats in St Petersburg following their victory over Denmark in the opening game.

The total of daily new cases has since risen from around 50 to more than 100, according to official data.

"These are people who have been at the games. Clearly it has spread surprisingly well there, considering that Finns have mostly interacted with each other but contracted the virus in just a few days," said Risto Pietikainen, chief physician for the hospital district covering the main crossing point.

The Finnish Institute for Health and Welfare said almost 100 infections had been diagnosed among Finns who had travelled to St Petersburg and the number was likely to grow. 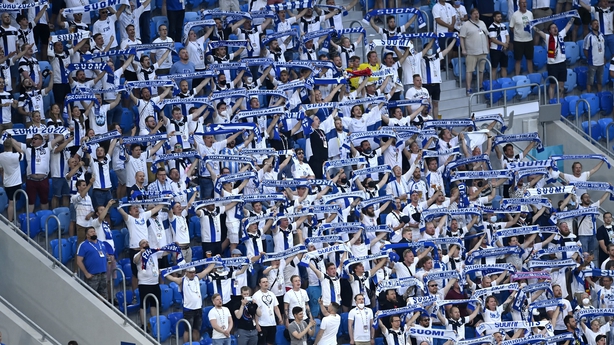 Mika Salminen, head of security at the health institute, said a majority of those who contracted Covid in St Petersburg were football fans.

Most infections were found in people on 15 buses that left the city for Finland on Tuesday.

Authorities expect more people to test positive in the coming days because of the long incubation period of the virus and because they were not able to test all arriving fans before the main crossing point closed on Tuesday evening.

Finland however remains among the countries least affected by the pandemic. The nation of 5.5 million people has recorded 969 deaths and has 33 people hospitalised due to Covid-19.