The so-called Group of Death is still very much alive at Euro 2020 with Germany, Portugal and Hungary all still hoping to join France in the last 16 after today's final round of group games.

Results from the previous round of fixtures blew Group F wide open with Germany beating Portugal 4-2 and Hungary holding world champions France to a 1-1 draw.

Having lost their opening game to France and also gone behind to Portugal, Germany looked in genuine peril, but they will now fancy their chances of topping the group given that they face Hungary today.

France are already through and will finish top if they beat Portugal, or with a draw should Germany fail to win.

Holders Portugal could crash out in fourth place if they lose to France (Live on RTÉ2 and RTÉ Player, 8pm) and Hungary also beat Germany at the same time (RTÉ News channel and RTÉ Player) or even if they finish third but lose by three goals.

The striker has not found the back of the net since returning to the squad following a long international exile.

Benzema scored 30 goals for Real Madrid last season but after four matches for France without a goal, some are starting to question whether Deschamps' decision to bring back the 33-year-old was the right one.

Some observers think Benzema’s return to partner Kylian Mbappe in attack at the expense of Olivier Giroud has disturbed the balance of the team.

Deschamps told uefa.com: "Strikers live and feed off goals. Karim is carrying a heavy burden despite his experience. He has a responsibility, the same as Giroud three years ago at the World Cup.

"The most important thing is that I have every faith in him and so, too, does the entire squad. There are times when strikers don’t score goals. They are judged on whether they score or not."

Portugal will go through if they avoid defeat, and they will finish first if they win and Germany do not.

However, midfielder Joao Moutinho is not interested in the various permutations, saying: "It's hypothetical whether we finish first, second or third. Our focus is on winning. We have our fate in our own hands. Our path is visible and we know what we have to do."

Portugal boss Fernando Santos believes his team will bounce back and be themselves against France tonight.

"We’ve analysed the Germany game and come to the conclusion we weren’t playing the Portuguese brand of football," said Santos.

"Something is wrong if a team that has conceded three goals in game only once in 58 games, concedes four for the first time. You need to both attack and defend well. The players will react well."

Joao Felix and Nuno Mendes both missed the defeat in Munich but have since trained with the rest of the squad.

Germany manager Joachim Low will wait until the last minute before making a decision over the inclusion of Thomas Muller against Hungary.

Muller has over 100 caps to his name, and an international record that includes 38 goals, 36 assists and a World Cup golden boot in 2010.

The 31-year-old sustained a knee injury during Germany's dominant 4-2 win over defending champions Portugal which kickstarted their tournament and put their hopes of qualification firmly within their grasp.

Hungary manager Marco Rossi urged his side to exercise caution as they look to build on their draw against world champions France.

"If we think we can come here and go gung-ho, all-out attack against Germany, we'll concede six," the manager said.

"We need to be very careful, we need to be well aware of what our strengths are and of where our weaknesses lie, and we need to produce a tactically flawless performance."

A surprise win for Hungary would knock Germany out if France failed to beat Portugal.

Group E will also go down to the wire with Spain, Slovakia and Poland looking to join Sweden in the knockout stages.

Spain had been expected to stroll through the group but now face a real fight to make it into the last 16 after drawing their opening two games against Sweden and Poland.

Cesar Azpilicueta has urged Spain to follow the example of their predecessors at the 2010 World Cup finals to get their Euro 2020 campaign back on track.

Luis Enrique's men head into their final Group E game against Slovakia in Seville sitting in third place after draws with Sweden and Poland and knowing there is little margin for error if they are to make it to the knockout stage.

However, having watched from afar as Spain fought back from a 1-0 opening defeat by Switzerland to win the World Cup in South Africa 11 years ago, Chelsea defender Azpilicueta is confident they can still make their mark.

He said: "What’s required of us is to overcome these difficulties like the Spain squad did at the 2010 World Cup.

"I wasn’t there, but we have to take that example and take the opportunities in front of us, meaning that we could finish top or second in the group.

"Every tackle, every pass, every chance needs to be treated like all or nothing. I think we will do it."

A draw would be enough for Spain to qualify in third unless Poland beat Sweden, who have already qualified. 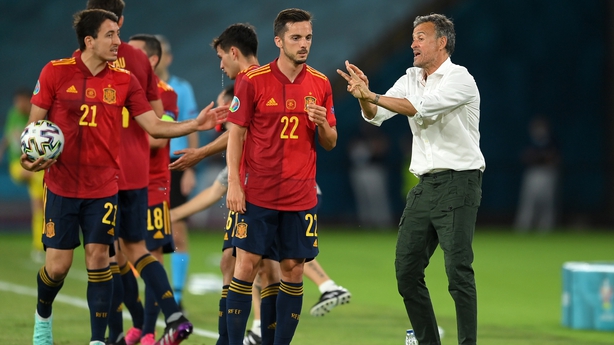 A draw would be enough to send Slovakia, who launched their campaign with a win against Poland, into the last 16, but skipper Marek Hamsik, who played in a 2-1 European Championship qualifying victory over Spain in October 2014, knows that will be easier said than done.

Asked if he was surprised by their results to date, Hamsik said: "Of course. They were the favourites in our group and probably they themselves are surprised as well.

"But in football, you never know because every game is different. You always write a different story and tomorrow, it will be the same.

"Spain are the favourites. Everyone will expect their victory, but we will try to upset them. We need to get at least a point."

Poland goalkeeper Wojciech Szczesny insists the make-or-break nature of their final group game against Sweden has simplified his side's approach.

With just one point in Group E, the Poles have to win if they are to make the knockout stage.

Three years ago at the World Cup in Russia, Poland were the first European team to be eliminated after losing their opening two matches but the point they secured against Spain last time out has given them a lifeline.

Szczesny said the atmosphere within the squad is completely different to 2018.

"After our first match at the 2018 World Cup, when we still had two matches ahead of us and could qualify from the group, there was no spirit in the team," he said.

"Here, after the first match, even though we'd put ourselves in a very difficult position, you could tell we had faith and the will to qualify.

"Mentally, it is pretty easy when you know you have to win the match. No need to speculate.

"So the mental approach to such a game is much simpler because you don’t leave any energy for the last few minutes or the next match.You play for your life, and I think that can help us."

What Poland, who will assess Southampton defender Jan Bednarek (muscle) and Brighton midfielder Jakub Moder (knee) ahead of the game, have to their advantage is Robert Lewandowski, who set a new Bundesliga goalscoring record of 41 goals this season.

Sweden are the surprise leaders of Group E and that success has been built on solid defence as they have yet to concede at the tournament.

Lewandowski obviously poses a significant challenge but centre-back Marcus Danielson said the Bayern Munich striker cannot be their only target.

"We can’t focus on just one player," he said. "Of course he’s their best and most important player, but we need to defend as a team – against him and the rest of the Polish team.

"We have a structure and a defence that works really well, and we never shy away from the effort needed in every match."