The Denmark players will not train at the Parken Stadium ahead of their Euro 2020 clash with Belgium, but some of them will visit the arena in an attempt to put the traumatic events of Christian Eriksen's collapse behind them.

The 29-year-old Inter Milan midfielder had to be resuscitated on the pitch at the Parken Stadium in Copenhagen after slumping to the ground during the first half of his side's 1-0 Group B defeat by Finland on Saturday evening.

The Danes have been working to recover from that shock ahead of their Group B clash with Belgium tomorrow (Live on RTÉ2 and RTÉ Player).

Teams usually train at the match arena the day before a game, but the Danes chose to remain at their base in the coastal town of Helsingor, about 45 kilometres from Parken.

"We are not training in Parken, but we will have a bus going in there for everyone who thinks it is a good idea to get back and just be there and see everything again, and be there for the first time since Saturday, so that is a possibility for all of us," Denmark coach Kasper Hjulmand said.

The Danes have had psychologists and crisis counsellors helping the players who witnessed their stricken team mate receiving CPR on the pitch before being taken to hospital for treatment where he is still recovering.

"The hospital is right next to Parken and probably he will be able to hear everything (against Belgium), so that's a crazy situation for Christian. Yeah I think he will be in his shirt and watch the game," Hjulmand said.

The Danes now face arguably their toughest group game against top-ranked Belgium as they try to get their campaign back on track.

"There is no doubt that we are underdogs. We are up against a world-class team... they are one of the teams that would remind you most of a club side in terms of their flexibility and clarity," Hjulmand said. 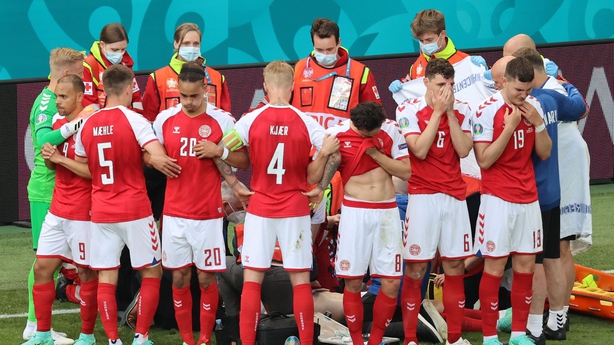 Meanwhile, Thomas Delaney believes the Danish squad's bond has been strengthened in the wake of Eriksen's collapse.

Midfielder Delaney told a press conference: "I've experienced a lot in this squad for the past few days. Everyone had the opportunity to be honest about their feelings and it’s been a good thing.

"It’s nice that we all know each other and everyone can just be themselves.

"It’s a terrible situation, but thankfully it’s a nice place to be right now."

Skipper Simon Kjaer was quick to realise Eriksen was in trouble and to summon medical help, and he and the remaining members of the team formed a protective shield around the stricken former Tottenham star as he was treated on the pitch.

Many were visibly moved, while others prayed with team doctor Morten Boesen, who later revealed he "was gone".

"Unfortunately, I’ve done this before. We decided to make this shield to protect him. It was not only to protect Christian and the medical staff, but also Christian’s friends and family.

"It was not a fun situation to be in, but it was a way we could help Christian."

The football world was stunned as events unfolded in front of millions on television, and Eriksen thanked those who had sent messages of support in an Instagram post on Tuesday in which he said he was "fine – under the circumstances".