Denmark talisman Christian Eriksen received emergency medical treatment on the pitch after collapsing during the first half of the Euro 2020 clash with Finland in Copenhagen.

The Danish football association later said on Twitter that the 29-year-old was awake at the nearby Rigshospitalet, where he was being examined.

"We have been in contact with him and the players have spoken to Christian," said Peter Moller of the Danish Football Association.

The game was initially suspended but then it was decided that it would resume at 8.30pm local time.

"He is doing well and they are playing the match for Christian," Moller said.

Later in the day, Belgian striker Romelu Lukaku, a teammate of Eriksen at soccer club Inter Milan in Italy, ran to a TV camera and shouted "Chris, Chris, I love you" after scoring in his side's opening match against Russian.

People gathered outside bars in central Copenhagen, many in tears, while Eriksen's condition remained unclear.

Officials held up sheets to hide the player from view while he was being treated, and the stadium announcer initially told fans that the game had been suspended.

The crowd at the Parken stadium in Copenhagen sang the Danish national anthem and chanted "Christian Eriksen" while they were waiting for news about the player.

"Our thoughts and prayers are with Christian Eriksen and his family," Portuguese star Cristiano Ronaldo said on Instagram. "The world of football stands together hoping for good news. I'm counting on finding you soon back on the pitch, Chris! Stay strong!"

The teams were later able to resume the match, which Finland won 1-0.

The Belgium-Russia game goes ahead as planned at 8pm, following a harrowing couple of hours in Copenhagen.

After more than 10 minutes of on-pitch treatment, the Inter midfielder was stretchered off the pitch to applause from the fans in Copenhagen.

UEFA president Aleksander Ceferin: "Moments like this put everything in life into perspective. I wish Christian a full and speedy recovery and pray his family has strength and faith…" 1/2

He was given CPR by medics while his team-mates formed a ring around him as medics pumped his chest just before half-time in their Group B clash with the Finns.

A Reuters photographer at the game reportedly saw Eriksen raise his hand as he was carried from the pitch on a stretcher. 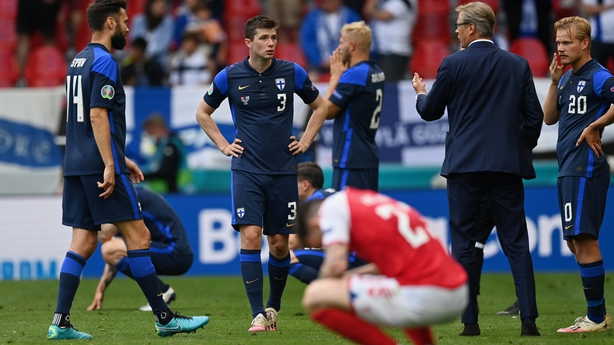 Eriksen collapsed suddenly in the 42nd minute of the match while running near the left touchline. Team-mates Martin Braithwaite and Thomas Delaney rushed to assist him, with Delaney beckoning furiously for medical assistance.