Sweetnam and Alejandro, a 12-year-old gelding owned by Sweet Oak, Spy Coast, & Seabrook LLC, came out on top after a stunning jump-off round when last to go against the clock.

Switzerland’s world number two Martin Fuchs and his 2018 World Championship individual silver medalist mount, Clooney 51, had held the lead with a clear round in 37.16.

However Sweetnam crossed the line in 37.03 after a daring gallop to the last fence to take victory, leaving Fuchs as runner-up.

Devin Ryan (USA) and Eddie Blue would finish third with a clear in 38.74 while Wexford’s Bertram Allen and The Irish Sport Horse Pacino Amiro also made it into the jump-off and would finish sixth with one fence down against the clock in 37.18.

"Obviously Clooney is one of the best horses in the world, and I watched Devin who rode at the start and saw his numbers, so I just thought about having a good rhythm from the start and I tried to do the same as Devin," said Sweetnam.

"I have a very quick horse, and he’s quick in the air. It was very close at the end, so you had to have a bit of luck to get there and it happened today." 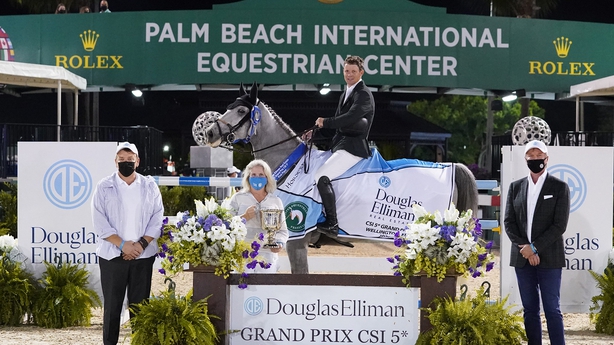 "I got him when he was quite green and raw, and we have built a great relationship," shared Sweetnam.

"The break because of Covid was good for him because it gave him time to chill out a bit, without traveling and doing bigger classes. Since then, he’s really been on form and placed in the top three or four in every grand prix he has done.

"At the start of circuit, I blew the three-star under the lights.

"I was too far off the last fence, so I was mad at myself. It wasn’t really his fault, so I made up for it today and he made the difference."