Irish Show Jumping is celebrating one of its biggest results of the season, after Tipperary's Shane Breen won his first ever Longines Global Champions Tour Grand Prix late on Saturday night in Monaco, while his countyman Denis Lynch stood beside him on the podium after claiming third place in the five-star €300,000 contest.

He was joined in the decider by Lynch with RMF Bella Baloubet and Lynch briefly held the lead when he posted the first clear in the jump-off in a time of 40.43.

Italy's Alberto Zorzi was second last to go with Fair Light van T Heike, and they looked to have done enough to take the win when knocking almost five seconds off the target - coming home clear in 35.72.

However Breen gauged the course to perfection when last to go with Ipswich, and a perfect stride to the last fence saw them cross the line in 35.56 to take the top prize of just under €100,000.

Zorzi collected €60,000 for his runner-up finish while Denis Lynch took home €45,000 when filling third place on the podium.

"I'm just ecstatic," said Breen. "It's the first time I have won a Global Tour Grand Prix and i'm just over the moon. I though Ipswich was just incredible.

"Every jump, he was just giving more and more and I just though, he is just enjoying it, he's loving it. I was a bit steady from fence 1-2 and then I thought, don't panic, we will make it up some way. He is naturally quick, so when I jumped the second last I saw a stride to the last and I said, here goes."

Breen was also thrilled to have secured his place in the lucrative Global Champions Tour play-off at the end of the season in Prague, which offers well over a 1 Million Euro in prize money.

"It's fantastic, 18 riders go to it and I'm just so delighted - it's a huge pot of money there and i'm looking forward to it." 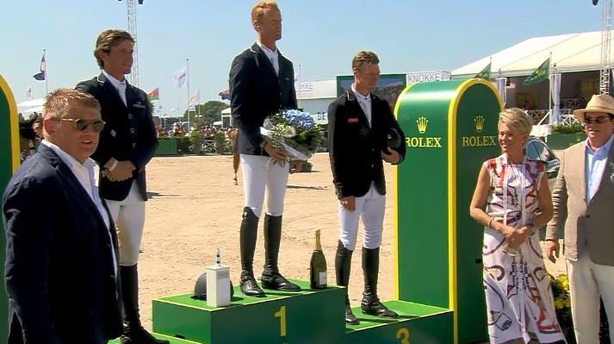