Ireland's Bertram Allen and the grey mare Molly Malone V, raced to victory in the Prix Massimo Dutti trophy in Monaco on Friday, after a 13-horse jump-off that had spectators on the edge of their seats.

Allen and Molly Malone produced a double clear round in 34.56 seconds to land the feature class of the day, in one of the smallest arena’s on the Global Tour circuit – nestled between the Formula 1 pit lane and super yachts birthed nearby at Port Hercule harbour.

Belgium’s Jérôme Guery finished under a tenth of a second behind with Alicante in runner-up spot, while Germany’s David Will came home in third with Cento Du Rouet.

Meanwhile Derry-born David Simpson also scored a win for Ireland on Friday at the Hickstead Derby meeting in the UK. Simpson guided Gotti Van Paemel to victory in the Bunn Leisure Derby Trial with the only double clear round of the competition. Tipperary’s Shane Breen finished third with Acoustik Solo Du Baloubet.

The world famous Hickstead Derby takes place tomorrow Sunday, with Trevor Breen hoping to join an elite list of riders who have won the Derby three times in-a-row. Breen scored his first Derby win in 2014 with the one-eyed wonder horse Adventure De Kannan, before adding a second victory in 2015 with The Irish Sport Horse, Loughnatousa WB.

Nick Skelton, Michael Whitaker and Peter Charles have won the Derby three years in-a-row, while Eddie Macken and the wonderful Boomerang, after whom the Hickstead Derby trophy is now named, remain the only combination to win on four occasions  – from 1976 to 1979. 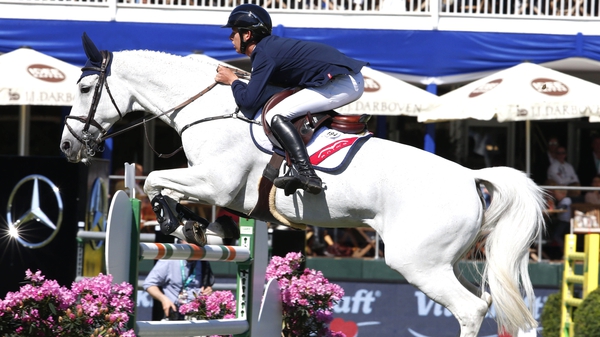