Ireland's Billy Twomey swooped to a glorious victory at the three-star Millstreet Grand Prix in Cork this afternoon, with Irish riders filling the first five places.

Riding Irish Sport Horse Ardcolum Duke, the Corkman was last to go in the jump-off, and managed to overhaul the target set earlier by Waterford's Peter Maloney on Ribanbelle Tame.

Only three combinations managed to post double-clear rounds, and it was Maloney who was first to register a second clear, stopping the clock in 50.24. Paul Kennedy followed with his second clear on Cartown Danger Mouse, but in a slower time to slot into second place.

It was left to last rider Twomey to haul in the leader and the Corkman duly obliged, going clear again in a time that was over two seconds sharper than Maloney's to claim the €16,500 first prize.

Dean Rogan on Falco van Spieveld took fourth with Edward Butler in fifth on Cornet Son, both riders incurring just one time-fault over the two rounds, with Rogan posting the faster jump-off time.

Cameron Hanley and Antello Z were unlucky in taking a wrong turn while still clear in the jump-off, but managed to finish with place money as consolation. 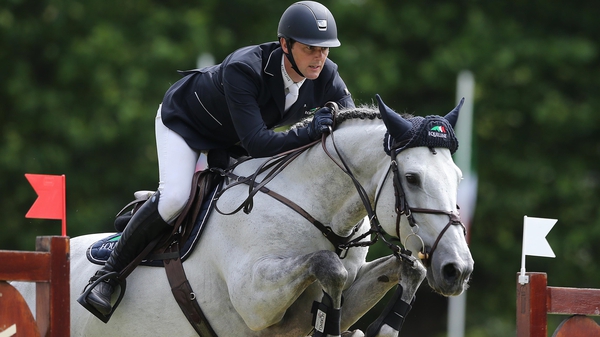 Billy Twomey bags a win at the Dublin Horse Show