Peter Wright put his name alongside some of the greats of the game by winning his second PDC World Championship.

The Scot backed up his 2020 title with a 7-5 victory over Michael Smith in a tense final at Alexandra Palace to join an elite list of names to win the Sid Waddell Trophy twice.

Wright, ranked number two in the world, produced his best darts when it really mattered, winning nine of the last 10 legs to get the better of Smith, who will be left ruing a missed opportunity.

But Wright, who did not get to bed until the early hours of Monday after an epic semi-final win over Gary Anderson, turned on the style to win a tournament that at one point it looked like might not go on after coronavirus forced the withdrawal of several players.

And Wright was last man standing as both finalists were left in tears on the stage at the end.

Smith was inconsolable but could take pride in throwing a record 83 180s, more than any other player in a single tournament.

A relieved Wright told Sky Sports: "Obviously I'm over the moon. I've done it, but obviously me and Mike didn't perform how we can.

"I can't explain what went wrong for 90 per cent of the match. I just kept swapping darts trying to find something.

"The atmosphere in here was just affecting my darts so badly - it affected Michael's as well. But it will be Michael's turn soon.

"It's just the atmosphere in here. It was really strange tonight and my darts were going in everywhere. But luckily enough, I won." 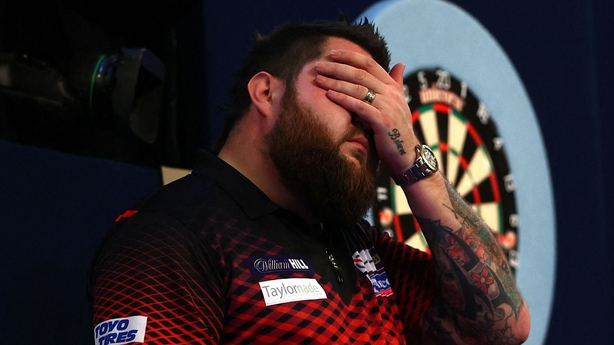 A disappointed Smith vowed to swallow his disappointment and return to the big stage.

He told Sky Sports: "I must have done something terrible in a past life because it's doing my head in now.

"I'll have a bad night now, but I'll definitely be back on that board and I'll be getting ready for the next one.

"I wasn't playing my best but every time it got to a two-set thing, I kept fighting back and fighting back but in the end, that bullseye wouldn't go in.