The World Darts Championship resumes today after a three-day Christmas break with three Irish players still in the mix.

Limerick's Willie O’Connor faces a tough battle against 2019 finalist Michael 'Bully Boy’ Smith, who has the tournament's highest average so far after hitting 106.32 in his 3-0 second-round win over Ron Meulenkamp.

But the Magpie won’t be overawed having come through two different challenges to get to the third round in his fifth appearance at the sport’s showpiece event.

Ranked 42 on the PDC’s order of merit, he survived a match-dart in a 3-2 win over American left-hander Danny Lauby in the opening round before coming up against an out-of-sorts Glen Durrant.

The former BDO and Premier League champion has endured a torrid year and following a 3-0 win, O’Connor said he has to improve on his 90.74 average.

INCREDIBLE START TO THIS MATCH!

Willie O'Connor pins a perfect bull for a 170 checkout and he breaks throw in the opening leg!#WHDarts pic.twitter.com/mFcksHVrId

"I’ve got no choice but to play well," the 35-year-old, who threw the tournament’s first 170 out-shot in the game, told Live Darts.

"I’m looking forward to it. I thought Michael threw some really good darts."

St Helen’s man Smith is a four-time major finalist and is current ranked at number nine. The 31-year-old believes he has rediscovered some of the form that saw him reach number three on the world.

"I’ve nothing to prove to anyone out there," he said. "It’s about me. I believe that I should be winning events. I can’t keep saying that I’m unlucky."

Their game is the second in this afternoon’s session, which gets under way at 12.30pm and is best of seven sets. 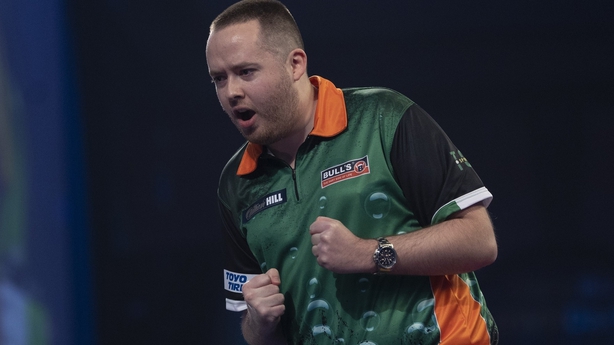 Next up is O’Connor’s Republic of Ireland team-mate Steve Lennon, who has reached the last 32 for the first time.

The 28-year-old, who reached the final of the World Cup in 2019, beat Latvia's Madars Razma in the first round before knocking out 12th seed Krzysztof Ratajski in the last round with a 91.34 three-dart average.

What a win for Scuba Steve! pic.twitter.com/8DN2HocrfP

"This is where you want to do it," he said. "The biggest stage of all."

King, ranked 21, came from two sets to nil down to beat Ryan Joyce.

The 55-year-old is also someone having a late career resurgence and was a beaten finalist in the 2020 Players Championship and this year’s Masters.

Also in action tomorrow is Derry’s Daryl Gurney, the highest ranked player from Ireland left in the William Hill-sponsored tournament, which has a pot of £2.5million.

Daryl Gurney comes from 1-0 down to defeat Ricky Evans 3-1 to close out this afternoon's action!

The 2017 Grand Prix and 2018 Players Championship winner is 22 on the order of merit and came through a tricky encounter against Ricky Evans in round two, hitting an average of 94.39.

The 35-year-old will face 2018 champion Rob Cross, who answered "100%, no doubt!" when asked if he could go all the way after beating crowd favourite Raymond van Barneveld in the second round.

Their clash is the opening tie of tomorrow evening’s session.

It was a tournament to forget for 2019 quarter-finalist Brendan Dolan, the Fermanagh man losing 3-0 to a red-hot Callan Rydz, despite hitting the sixth highest average so far, 100.02.

His FIFTH ton-plus finish of the match.

Keane Barry, meanwhile, got a much needed but nervy 3-2 win in his first round match against Royden Lam.

On form Jonny Clayton needed all of a 103.70 average to defeat the 19-year-old Meath man, who hit five 100+ outshots in a high-quality affair. The former Junior world champion will be better for the experience.

Germany’s Florian Hempel might be the dark horse to keep an eye on following an impressive win over Dimitri van den Bergh. The former professional handballer, who only took up the sport four years ago, faces Aussie Raymond Smith this afternoon.

However, the highlight of the Alexandra Palace event so far has been Willie Borland’s historic walk-off nine-darter in his first-round win over Bradley Brooks.

Lithuanian Darius Labanauskas also hit a nine-darter in his game. The tour had seen 39 perfect legs in 2021 so don’t be surprised if there’s another one soon. 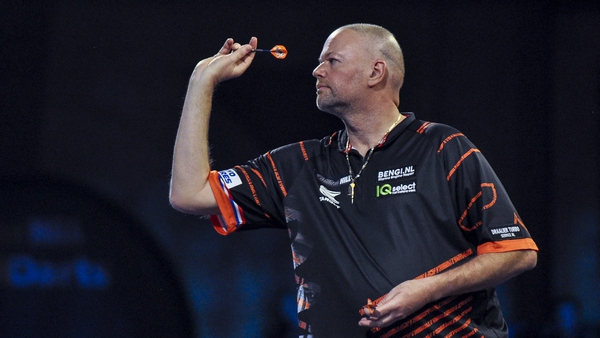