Daryl Gurney and Brendan Dolan enjoyed second round victories at the Ladbrokes Players Championship Finals on Saturday, while Adrian Lewis accused Peter Wright of being a "cheat" in his defeat at Minehead.

Dolan knocked out world champion Gerwyn Price 10-8 and will now meet Joao De Sousa in the last eight, with the Portuguese having beaten Limerick's Willie O’Connor 10-7.

Gurney eliminated James Wade, triumphing 10-7, to advance to a clash with Ryan Searle, who was a 10-7 victor over Rob Cross.

Following Peter Wright’s 6-5 victory in Minehead over Adrian Lewis, a heated exchange took place between the two players while they were still on stage, with Lewis looking particularly unhappy and ending up being led away by a member of security staff.

"I honestly did nothing wrong. Even I was bewildered with what was going on and trying to process it whilst trying to concentrate on my darts. So at the end of the game I wanted to find out what was his problem because I didn’t have a clue what was going on. 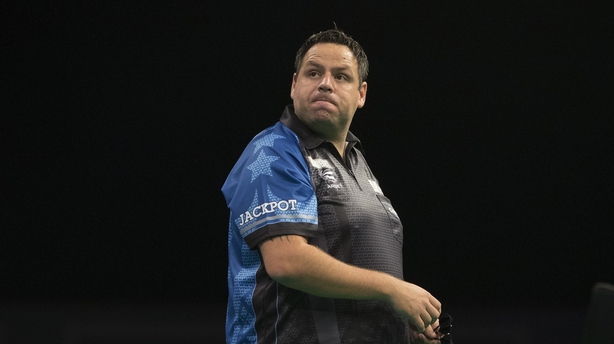 "He said to me there was a loose floorboard and I found it! So my response to him was: 'You took me out my rhythm, you had a game plan, and as world number two, it’s disgraceful and you’re nothing but a cheat’.

"He knew what he was doing, as soon as I went 3-1 up he started muttering things and shaking his head at me which put me in a situation that made me feel uncomfortable.

"The people who I fall out with always have to be the ones (that) apologise because they know I’m not a cheat, never have been, never will be!"

Lewis added: "Trouble does seem to follow me around, I can’t deny it, but it’s only because I’m a genuine person who wears my heart on my sleeve and people try to take advantage of that. I will always speak my mind!

"For those saying I’m a sore loser, this that and the other, I’m the best loser because I say it exactly as it is.

"I don’t try hide anything, I say what I see. Peter will say nice things about me in the interview as he knows I’ve done nothing wrong and he’s bang out of order."

Van Gerwen, who is looking to win the title for a seventh time, got past fellow Dutchman Raymond Van Berneveld 6-3 in round two before seeing off Gary Anderson 10-6.

The other quarter-final will be between Jonny Clayton and Vincent Van Der Voort following their victories over Luke Humphries and Danny Noppert respectively.