Michael van Gerwen ended his long wait for a first PDC title of 2021 as he survived a major scare from Fallon Sherrock to win 11-7 in the final of the Nordic Masters in Copenhagen.

The three-time world champion overcame Madars Razma 10-4 in his quarter-final earlier in the day before seeing off Premier League winner Jonny Clayton 11-7 in the semi-finals.

Sherrock had reached her first PDC final by producing a thrilling comeback to beat former World Matchplay champion Dimitri Van den Bergh 11-10 in the last four, having faced deficits of 8-2 and 10-6.

Having produced finishes of 101 and 100 in the last two legs of that match, she looked capable of causing another stunning upset as she led 6-3 during the early stages of the final but Van Gerwen reeled off six straight legs to clinch the crown.

"I had to wait a long time to win a trophy," said Van Gerwen in an emotional on-stage interview.

"Fallon played a phenomenal tournament and I think she played one of her best games in her life in the final and I want to give her all the credit because she made it really difficult. 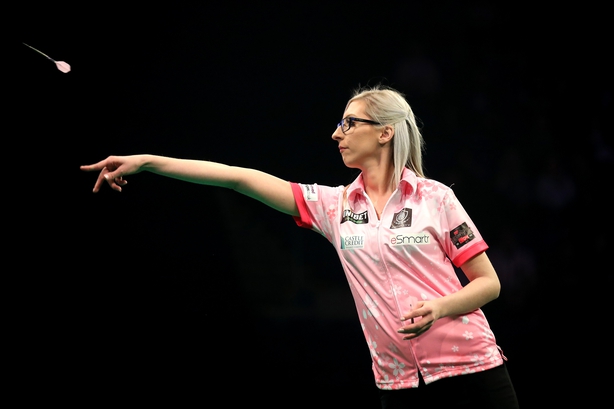 "I think I deserved it this weekend. I played really well overall but also the crowd has been absolutely phenomenal. It's been too long since we had crowds like this, especially on a televised tournament, all I can say is thank you very much.

"I've been through a really tough period, this means so much to me. I've been working really hard on my game and then it finally pays off and I think I played really well over here."

Sherrock tweeted afterwards: "What a night... absolutely buzzing despite not winning - so proud of myself. Congrats to @MvG180 - I can see why your the best now."