Keane Barry and Brendan Dolan won their second-round encounter at Hungarian Darts Trophy in Budapest on Saturday, but Daryl Gurney was eliminated from the competition despite a strong showing against Michael van Gerwen.

The most successful player in European Tour history, Van Gerwen is seeking a first PDC title of 2021 and was made to work hard for his passage into the last 16 by a resurgent Gurney.

A repeat of the memorable 2018 Players Championship Finals showdown saw both players average over 100 in a passionate contest which captivated the 4,000-strong crowd at the Papp Laszlo Sportarena.

Despite Gurney producing six 180s, it was Van Gerwen's 55% checkout success which saw him prevail, as the Dutchman wrapped up the final two legs in 15 and then 13 darts.

"Last time I played Daryl I lost to him, I knew it was going to be a tough game," Van Gerwen reflected.

"If you want to beat him, you have to play well. I knew that so I tried a little bit extra which showed at times of the match.

"Of course it would be extra special to win the title in front of this fantastic crowd. I hope to show them what I can do tomorrow. I'm here to win this title." 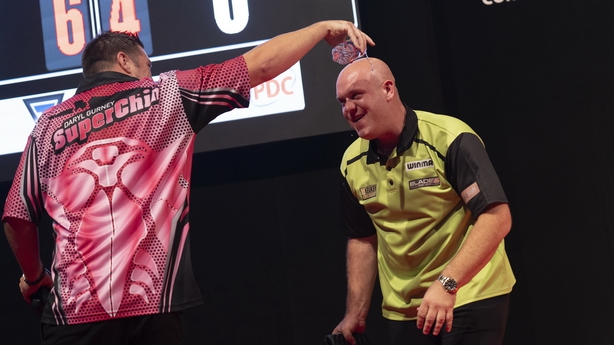 Borland was joined by four other players in knocking out seeded players, two of whom were teenage European Tour debutants Barry and Lewis Williams, who saw off Dirk van Duijvenbode and Krzysztof Ratajski respectively.

World number one Gerwyn Price missed double 12 for a nine-dart finish in his 6-4 win over Richard Veenstra, having recovered from a 4-2 deficit to set up a third-round tie with Damon Heta.

After winning the last five consecutive legs in his 6-4 win, Heta paid an emotional tribute to Anderson, a close friend since their school days in Perth.

"I think darts means something different to me now," explained Heta, who was wearing a black armband in remembrance of Anderson.

"Simon feels the same. It was definitely a hard game to play.

"Kyle would've loved it here tonight, he just wanted to give everyone a hug and a big smile."

Prior to the start of the evening session, players and officials took to the stage to perform a minute's applause along with the crowd in a fitting tribute to Anderson.

Jose de Sousa and Nathan Aspinall will meet in a repeat of May's Premier League semi-final after victories over Joe Murnan and Bradley Brooks.

Sunday will see the champion crowned at the end of the day's play, which will begin with the last 16 matches in the afternoon session before the quarter-finals, semi-finals and final in the evening.