Number one seed Michael van Gerwen survived two match darts to secure a spot in the last 16 at the PDC World Darts Championship after an epic encounter with England's Joe Cullen.

The Bradford man simply had to hold his throw in the final leg of the seventh set, but he completely lost his way as the three-time champion found a way to advance.

It had looked bad for the Dutch thrower early on as Cullen, who hit an incredible 19 180s throughout the game, raced into a 3-1 lead in sets.

Cullen lost the throw in the first leg of the fifth set to open the door and Van Gerwen halved the deficit before drawing level on sets after his opponent missed bull to take the game.

Cullen still had the throw heading into the decisive set but after both players held the throw for two legs each, the pressure told for the underdog in that decisive leg as Van Gerwen advanced to the last eight.

Sometimes the excitement is even too much for our commentators 😂😂

Van Gerwen told Sky Sports: "He was playing phenomenal and he put me under pressure loads of times, and I had to do everything in my power to beat him.

"I came back after the 3-1 break still with a lot of confidence, and I'm really glad I managed to do it. I had to keep up with him and it wasn't easy."

Tomorrow promises to be yet another dramatic day of darts with the six remaining quarter-final places on the line!

Join us from 1200 GMT. pic.twitter.com/KagiEdnZCM 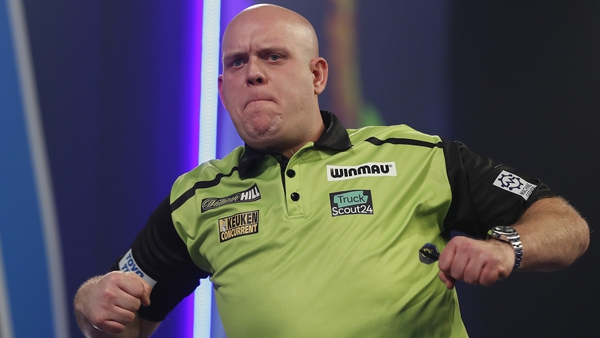