The World Grand Prix will not take place in Dublin this year, RTÉ Sport has learned.

The darts major, held annually in Ireland since 2000, has become the latest event to be affected by the coronarvirus pandemic.

The Health Service Executive has leased the Citywest hotel and conference centre as an isolation unit until late October, with the Grand Prix event scheduled for 4-10 October.

"The HSE licence agreement, in respect of both the Citywest Hotel and convention centre runs to 22 October 2020 and as such the HSE will be in occupation during the period 4-10 October," the HSE told RTÉ Sport.

The Grand Prix is the only darts major to be held in Ireland and attracts the sport’s top stars. World number one Michael van Gerwen is the current champion.

Derry's Daryl Gurney (below) became the first Irish player to win a darts major when he picked up the title in 2017.

Additionally, the event in west Dublin had recently incorporated the final of the Tom Kirby Memorial Irish Matchplay, which was a path to the World Championships at Alexandra Palace for the winner.

The Irish Matchplay has been cancelled, with the Professional Darts Corporation still to determine how the spot will be allocated. 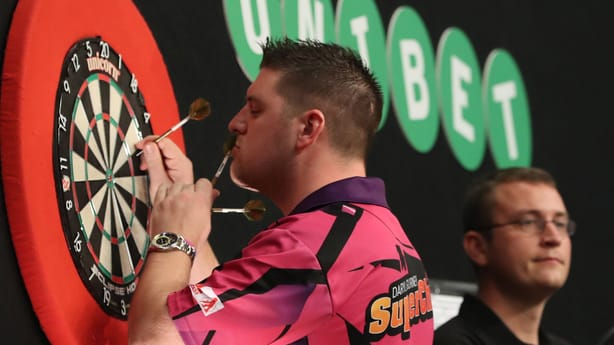 PDC chief executive Matt Porter told RTÉ Sport: "We are aware of the situation at Citywest in relation to our planned dates for the 2020 BoyleSports World Grand Prix.

"We are currently working with the relevant parties with a view to retaining the event's October dates at a new venue, and details will be confirmed in due course once finalised."

It is understood that, with the current quarantine restrictions in place between the UK and Ireland, the PDC is looking at venues in the UK, which would make the logistics of the staging the event much easier.

The World Matchplay in July, the Summer Series and Premier League events have held behind closed doors at the Marshall Arena in Milton Keynes.