The Middlesbrough man trailed 10-5 and 12-8 but hit back to edge the Dutchman, seizing his first chance with a 75 checkout in the extra-time leg.

"I've no idea how I won that game," admitted Durrant. "Vincent will be devastated because the better player lost but sometimes you need a bit of luck to get you through.

"I don't think I ever settled but sometimes you have to rely on experience. I was beaten but I've got through and to reach back-to-back semi-finals in this event is tremendous.

"I want to go to the next level now. It's a massive opportunity - the top four seeds have fallen and I've dodged a bullet tonight."

Van der Voort later apologised to referee Kirk Bevins following an incident towards the end of the game.

Bevins ruled out a dart that the Dutch man threw underarm but Van der Voort thought he had been penalised for stepping over the oche, with VVVD clearly upset after Durrant hit the winning double.

🔎 John Part gives his reaction to Vincent van der Voort's emotions at the end of his quarter-final against Glen Durrant.

"Having seen footage and spoken to people I need to apologise to Kirk the referee as I thought he complained that I stepped over the oche and this is why I reacted at end of the game," Van der Voort said in a tweet.

"He actually complained that I threw the dart not correctly, which I now know.

"Also to Glen, he took advantage of my fall of concentration with the incident allowing him back into the game, for that he did well and best of luck in today's game to him."

Durrant will face Dimitri Van Den Bergh in the last four after the Belgian scored a superb 16-12 win over Adrian Lewis.

The underdog raced into a commanding 10-4 lead but Lewis clawed his way back to within three legs and threatened to complete a remarkable comeback.

Not very often you see this many missed darts in one leg in a televised quarter-final! It looked like neither player wanted to win that leg!

Tag a mate below who this reminds you of 👀 pic.twitter.com/0Ic04keCbX 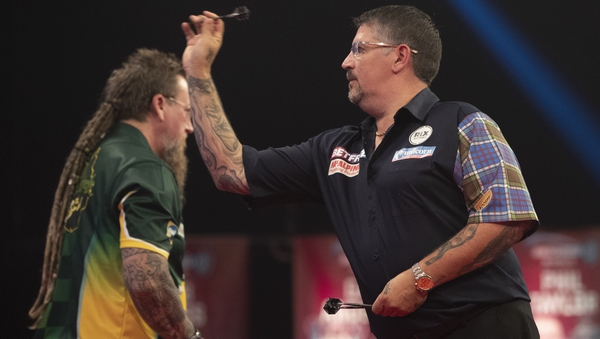