Van Gerwen claimed a 5-2 triumph after a match which was briefly interrupted when his opponent sustained an unusual finger injury early in the third set of the match.

Labanauskas, who had taken the opener to threaten a surprise, drew blood after accidentally stabbing himself with a dart, but showed no ill effects after the brief interruption.

The World No 1 looked set to pull away from his opponent when he took the next two sets to go 3-1 in front, but gutsy Labanauskas pulled one back to haul himself back the match.

Michael van Gerwen sets up a Semi-Final clash with Nathan Aspinall after a hard-fought 5-2 win over Darius Labanauskas! pic.twitter.com/Cep382ziA4

In a high-quality battle in which both men hit six perfect darts at the start of a leg to hint at an elusive nine-darter, Van Gerwen finally showed his class to pull away again and take his place in the last four.

Aspinall returned to the semi-finals for the second successive year with a 5-3 win over Dimitri Van Den Bergh.

Aspinall also established a 4-1 lead before beginning to waver, and he admitted afterwards: "I don't know why I felt so nervous. It is something I need to address. The occasion got to me and I didn't play very well so I'm happy to get through." 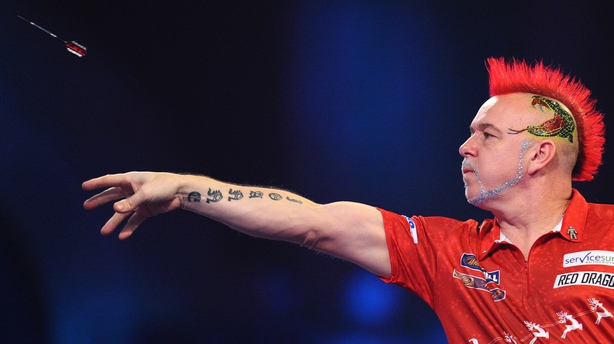 Earlier, Peter Wright shrugged off a recent bout of illness to defeat Luke Humphries 5-3 and keep his own hopes of a first world title alive.

Former runner-up Wright produced a spectacular start, averaging just under 106 and hitting a maximum 170 check-out as he charged into a 4-1 lead.

Humphries recovered well to reduce the deficit then whitewash Wright in the seventh set before the 2014 runner-up settled his nerves by closing out the match.

Wright said: "I wanted to go out and stay on top of him and I did that.

"I played well but I need to be much more consistent to go all the way but I feel really good and when I feel this good I can win anything."

Seventh seed Wright will take on third-ranked Gerwyn Price, who stormed into his first World Championship with a dominant 5-1 victory over Glen Durrant.

Price opens up a three set gap as he takes a 4-1 lead over Durrant and now he only requires one more set for a place in the Semi-Finals... pic.twitter.com/DedApq9wru

Meanwhile, the PDC have announced that the 2020 Premier League will feature nine 'challengers' in a move which potentially opens the door for Fallon Sherrock to feature.

Last year's competition included nine 'contenders' for the first time after Gary Anderson was forced to withdraw from the tournament with a back injury.

The PDC have decided to use the system again, although rebranded as 'challengers', and it may allow for the inclusion of Sherrock after her history-making run at the World Championship.

The 25-year-old became the first woman to win a match at the tournament, before then beating number 11 seed Mensur Suljovic on her way to the third round.

Points won by the challengers will not count towards the league table of the weekly competition, which begins on 6 February in Aberdeen and concludes at London's O2 on 21 May, but they will receive financial rewards for winning or drawing matches.

The top four players in the PDC Order of Merit qualify automatically and are joined by five wildcards. Those selections will be confirmed after the World Championship final on `1 January, and the 'challengers' will then be announced in early January.

After her defeat to Chris Dobey, Sherrock said she hoped women would be given more opportunities and spoke specifically about an increased number of places at next year's World Championship.

Earlier on Sunday, the PDC announced she would be featuring in all 2020 World Series of Darts events, including tournaments in the United States, Denmark and New Zealand.