Meath teenager Keane Barry will face Vincent van der Voort of the Netherlands when he makes his World Championship debut at Alexandra Palace next month.

The 17-year-old from Duleek, who qualified after winning the Tom Kirby Memorial Irish Matchplay, faces an experienced campaigner who is currently ranked 33 in the PDC Order of Merit.

Should Barry progress he gets a shot at world number 10 Dave Chisnall.

Derry's Daryl Gurney, the 2017 World Grand Prix champion, enters the fray in round two as the sixth seed and will play the winner of Justin Pipe and Benjamin Pratnemer.

Kevin Burness, who won his place after coming through the final qualifier today in Wigan, will meet Jelle Klassen, who sits at 48 in the order of merit, with the winner earning a round-two clash with reigning world champion and world number one Michael van Gerwen.

The Co Down thrower is ranked 87. 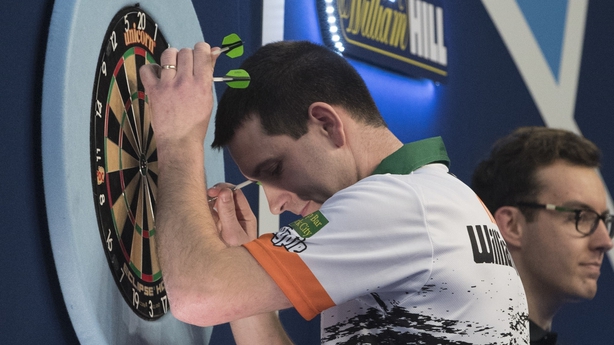 Players Championship quarter-finalist Willie O'Connor (ranked 37) from Limerick has to overcome Marko Kantele (119) of Finland to book a date with the in-form Gerwyn Price (3), the reigning Grand Slam champion.

Tyrone's Mickey Mansell (62), appearing at his fifth World Championship, will play Japan's Seigo Asada, an international qualifier, with the victor setting up a meeting with Keegan Brown (26).

Carlow man Steve Lennon (38) must overcome Callan Rydz (125) of England to book a face off with Danny Noppert (31) of the Netherlands.

Here's the draw bracket for the 2019/20 @WilliamHill World Darts Championship...

World Championship quarter-finalist last year Brendan Dolan (35), from Fermanagh, has a date with two-time winner Gary Anderson (5) if he can get the better of India's Nitin Kumar.

Ciaran Teehan from Cork, who qualified after impressing on the development tour, will play England's Ross Smith (49).

If the 20-year-old prevails he will face Mervyn King (19) in the second round.

Ireland's representation of eight players is the most ever at a World Championship.

BDO Women's champion Mikuru Suzuki will play James Richardson for the right to face John Henderson, while Ted Evetts is Fallon Sherrock's rival for a match-up with Mensur Suljovic.

The tournament runs from 13 December to 1 January with the schedule to be announced in the coming days.