Michael van Gerwen reckons rising Irish darts player Keane Barry could have a big future in the game, but warned that he must "make the right decisions".

It capped a hugely successful fortnight for the Duleek thrower.

He had already battled through to the International Junior World Championship final, which will be played at Ally Pally during the showpiece tournament.

Barry also won the Junior International Open in Gibraltar, hitting a 100.5 average in the final, and the Northern Ireland Matchplay in the last two weeks.

And prior to his Tom Kirby win, where he survived 11 missed match darts by his opponent, he got to practice with three-time and current world champion Van Gerwen.

"Of course, he was a bit lucky that he won this game because he underperformed. I was practicing with him and he's got a lot more talent in there.

"I think he had some nerves, but that's all part of the game.

"He's a good guy to practice with and I enjoyed it.

"I want to wish him all the best, and with his qualification for the World Championship, I think his career is going to start now.

"He needs to do really well and make the right decisions in life." 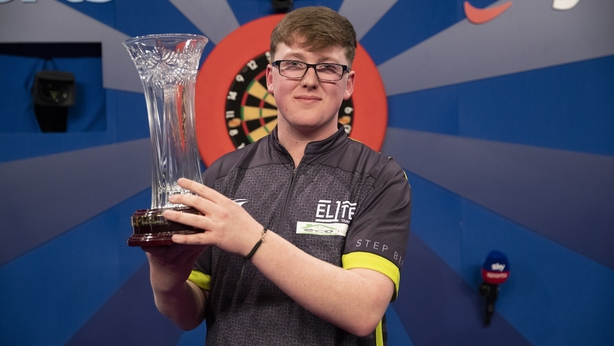 Keane will now step up preparations for his debut at the World Championships and is on course to be the youngest player at this year's event.

He joins the action in the first round and could even be drawn against five-time world champion Raymond van Barneveld, who is set to retire after the tournament.

Barry, who is a member of Junior Darts Corporation Ireland, told RTE Sport: "It's a dream come through [to qualify] and it's very early for me.

"I'll be the underdog no matter who I play. I'm only a young lad from Ireland, so I'm just going to go over there and enjoy myself.

"I think it's Barney's last year. It would be amazing even to have the opportunity to play on the same stage as him, to play him would be brilliant. That would be the cream of the crop, to play such a legend of the game.

"I am going over there to win, I know on my day I can beat anyone. I'm going to be prepared and we'll see what happens."

Barry is one of five Irish players, alongside Daryl Gurney, Brendan Dolan, Steve Lennon and Willie O'Connor, already guaranteed qualification for the Worlds.