Van Gerwen followed up his previous victories in 2012, 2014, 2016 and 2018 by retaining the title in the double-start tournament for the first time by continuing his dominance of the event.

The world champion condemned Chisnall to defeat in the final for a second time in six years, despite a plucky showing which included a dozen 180s.

However, after sharing the opening two sets, Van Gerwen showed his class in the deciding leg of the next two to pull clear before holding off Chisnall's brief rally to close out a glorious triumph.

Van Gerwen dominated the early exchanges, winning the opening set 3-0 without allowing Chisnall a dart at a double.

The 2013 runner-up hit back well in the second, trading 13-darters with Van Gerwen before winning the set's deciding leg with a 101 checkout on double 16.

The third set also went all the way as Van Gerwen came from 2-1 down to level with a 13-darter before taking out 111 to claim the set.

A 114 checkout moved the Dutchman 2-0 up in set four, only for Chisnall to land seven perfect darts in an 11-darter to respond before a 14-dart finish forced a decider.

However, Van Gerwen crucially stepped up once again, defying a 180 from his rival to land tops for a 13-darter and a 3-1 advantage in the final.

Van Gerwen then took set five by a 3-1 scoreline to continue his surge towards a fifth title, although the World Champion could only watch as a brilliant 13-darter from Chisnall in the set six decider saw him hit back to 4-2.

Chisnall also shared the opening two legs of set seven, and the pair then traded 14-darters before another deciding leg went to Van Gerwen as double six sealed the title. 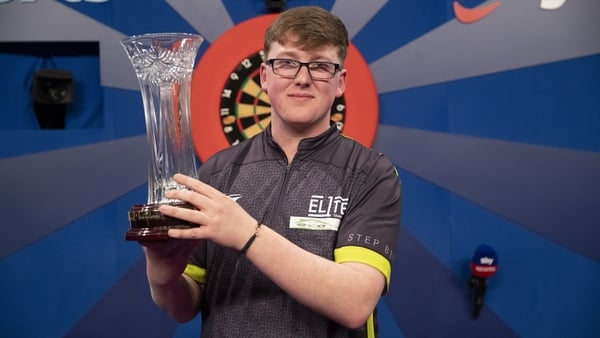