Daryl Gurney became the first big casualty of the World Grand Prix in Dublin when he suffered a first round defeat to Danny Noppert.

The Derry native was looking to reclaim the title he won two years ago, but fell to a shock 2-0 defeat to the 28-year-old Dutchman.

The first set went to a deciding leg with Gurney coughing up two shots at double.

The underdog failed to take out a Shanghai finish in the first leg as Gurney again struggled with his finishing and victory was wrapped up on D8 after Gurney failed three attempted at D20 to move into the second round.

It feels good," said Noppert. "Daryl missed a lot of doubles and I took my chances, and to win against a top ten player is brilliant for me.

"I'm over the moon with this win and it means a lot to me. I'm in the tournament now and looking forward to Wednesday evening."

Two-time world champion Adrian Lewis was another big name to make his exit after suffering a 2-1 defeat to Jermaine Wattimena. The Dutchman will now face Peter Wringt in the next round after 'Snakebite' overcame Max Hopp 2-0 in the final game of the night at Citywest.

Gerwyn Price and Dave Chisnall were involved in a titanic tussle. Price took the first set despite the significantly better scoring average from the English thrower, but powered back in the second to ensure a deciding set.

Three break of throws added to the drama, but Chisnall's 99 checkout secured victory. 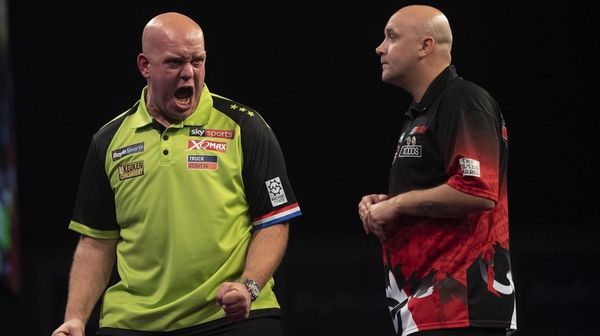