Raymond Van Barneveld crashed out of the PDC World Darts Championship in a shock 3-2 loss to Darius Labanauskas at the Alexandra Palace.

Van Barneveld never led in the Round 2 match, with his frustration visibly growing as he missed several darts which could have turned the tide.

Labanauskas also began to make mistakes as the tension rose, but the 42-year-old Lithuanian saw it through to record the biggest win of his career.

Dutchman Van Barneveld, a five-time world champion, as hoping to add a second PDC title before his planned retirement at the end of next year, but instead saw his 2018 tournament end at the first hurdle.

It came down to a dramatic deciding set during which Labanauskas offered Van Barneveld numerous chances to get back in it, averaging only 73 and missing 11 darts to take the first leg.

But Van Barneveld never looked convincing going for the doubles and passed up every opportunity sent his way, ultimately losing the final set 3-0.

RAYMOND VAN BARNEVELD IS OUT OF THIS YEARS WORLD CHAMPIONSHIP 😨😨😨

Labanauskas knocks out the 5 time world champ in round two!#WHDarts pic.twitter.com/q5aWKtFIrk

Earlier Devon Petersen won a dramatic first-round matchup with Wayne Jones in which both players passed up several chances to win before Petersen advanced.

The pair had traded blows throughout before the match went to a decider, in which Jones passed up six attempts at a match-winning double before Peterson snatched it at the eighth attempt.

"Not to sound too cocky but I think the right man won in the end," Petersen told pdc.tv. "I was way ahead of him performance-wise and I just let him in after 2-0 which was my fault because I felt like I was cruising.

"I thought it was going to be 3-1 worse-case scenario. I'm just happy that I won in the end." 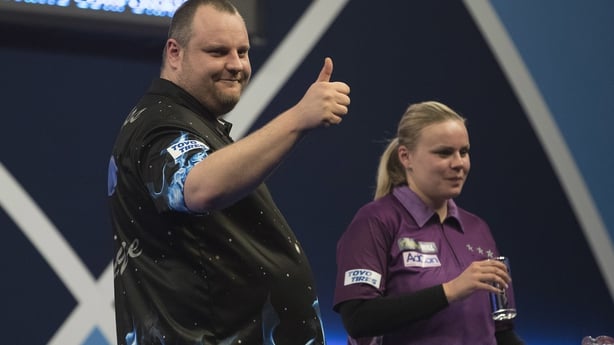 Anastasia Dobromyslova's second appearance at the Alexandra Palace proved short-lived as she was beaten 3-0 by tournament debutant Ryan Joyce.

The three-time women's world champion, who also competed in the preliminary round of this event in 2009, qualified for this year's expanded field via the Rest of the World qualifier but could not advance in the tournament as Joyce overcame early nerves to dominate.

This 122 from Joyce may be a real game changer....#WHDarts pic.twitter.com/Q0rdhHRm83