World number one Michael van Gerwen believes only Gary Anderson can stop him winning a third world title if he finds his best form.

The Dutchman goes into the William Hill World Darts Championship at the Alexandra Palace later this month hoping to add to the crowns he won in 2014 and 2017.

To do so, though, he knows he has to improve his game by an extra couple of per cent after a difficult few months where he has dropped below his usually impeccable standards.

Van Gerwen certainly does not lack belief and is confident that if he is at his best, he will be the man to beat.

Anderson is also searching for a third title and the pair are on course for a semi-final meeting.

"Everyone knows when I am at 100% only one person can challenge me and that is Gary Anderson," Van Gerwen said.

"They all need to play their best to beat me and they know that, that's nothing new.

"This World Championship is a big one for me, I need to make sure I am ready for it. It is the most important time of the year and I am looking forward to it.

"The last two months have not been what I have wanted them to be but I still have had good results and am playing well, so I need to make sure the last few percentage is going to get better, with a bit more preparation I will be ready for it.

"I need to do one or two things to improve the things I was not 100% good at. There is more in the tank for me." 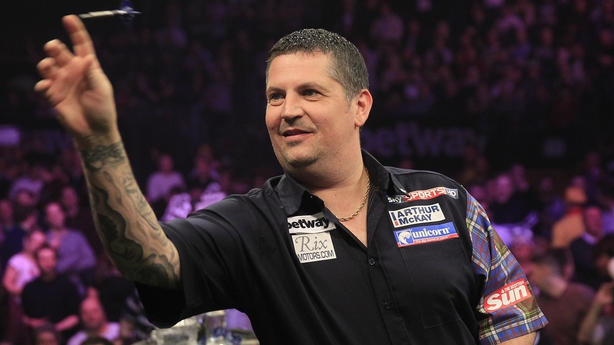 Van Gerwen might have to beat Raymond van Barneveld and James Wade before he even gets a look at Anderson, but the Dutchman was blunt in his assessment of his tough potential route to the final.

"They will have a tricky run as well coming up against me," he said.

The Dutchman and Anderson are two of four men who are locked on two world titles, with Adrian Lewis and John Part also winning twice.

But van Gerwen does not believe he needs a third crown to set him apart from the rest, citing his glittering back catalogue of PDC titles, which include two World Matchplays, four Grands Prix, four Grand Slams and four Premier Leagues.

"People always say you get judged on [the] World Championship," he said.

"It's not only the World Championship, I have won over 150 PDC ranking events and it's everything combined.

"With all due respect Adrian Lewis has won two world championships as well, but for the rest of his talent he hasn't won enough."