The reigning Grand Prix champion is currently ranked at number five in the world and finished fifth in his debut Premier League appearance earlier this year.

That comment has somewhat bemused the 32-year-old, who begins the defence of his Grand Prix title against John Henderson tonight at Citywest.

Gurney told RTÉ Sport: "My manager said, 'before somebody else tells you, I’ll tell you [what he said]'.

"Honestly, I still don’t why he said it. If he feels I’m not good enough to be top eight, well he’s probably right because I’m top five.

"Obviously, Michael isn’t worried about any player, he was just having a jab at me.

"It was just one of them things that he just wanted a go at somebody and for some weird strange reason it seems to be always the Irish person they pick on.

"I mean, it’s water off a duck’s back, whenever you’re working with children that goes on like that, what’s the sense worrying about it?" 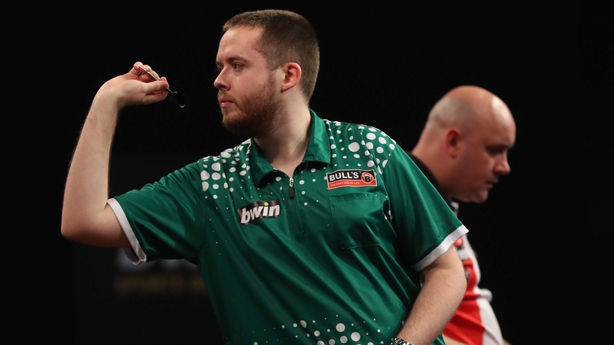 Van Gerwen is also in action tonight and he’ll face Carlow’s Steve Lennon in the first round.

Gurney made no secret of the fact that he’ll be throwing his full support behind the underdog.

"I think Steve will be fine. It could end up going 2-1 [to Lennon] in the sets. Anybody could beat anybody," he said.

Lennon, who is ranked at 44 and is making his Unibet Grand Prix debut, told RTÉ Sport: "I’m getting used to playing him now, it doesn’t affect me as much.

"The format, with a double to start, is a bit of a leveller, in such a short format as well, anything can happen.

"Always around this time of the year, you’d be a bit more weary of him with the World Championships coming around, he’s not going to want to lose.

"All you can really do is play your own game, keep focused, forget what’s he’s doing because if his 'A' game turns up, you have to be on top form and if he’s making mistakes you have to make sure you capitalise on it.

"It will be nice to finally have home support, I’m used to playing in England and Germany.

"Hopefully, I’ll come out with an Irish win at the end."