Provisional-round qualifier Lewis missed several darts at key stages in the match as the experience of Taylor reaped dividends in the highly-anticipated semi-final.

The Stoke player, who has won this title 14 times and the BDO world title twice, will retire after this tournament and last played in the final two years ago where he was beaten by Gary Anderson.

Taylor started strongly and broke Lewis' throw in the first leg then led 2-0, but the Welshman hit back and won the next three legs to claim the first set with a double 16 finish.

The second set was as closely-matched but Taylor edged past his 26-year-old opponent after he missed a double 13 finish to level at 1-1.

The third set also went to a fifth leg thanks to a 100 checkout from Taylor, with three missed darts from Lewis then allowing the 16-time world champion a shot at double 20 to move 2-1 ahead in sets, which he duly took.

Lewis moved ahead in the fourth set after some slack darts from Taylor and narrowly missed the bull to clinch the set, allowing the Stoke thrower to level at two legs all.

Lewis was left kicking himself after he squandered yet more darts to let Taylor back in to claim the fourth set and a 3-1 lead before the 57-year-old came out on top in the next to move to two away for a place in the final.

Taylor's experience was paving his way to the perfect end to his career and he matched Lewis' break before going on to take the sixth set for a 5-1 lead.

Lewis put up a fight in the seventh set by claiming the first two legs but Taylor pegged him back before clinching victory to the joy of the packed crowd.

"I'm over the moon. The first two or three sets I didn't know where I was. I was struggling, I couldn't put three darts together," Taylor said.

"Now I'm retiring, he (Lewis) is the one to watch for, trust me, because he's a lovely player, he's got a cracking family behind him and he's got no airs and graces, just gets on with his job. I can't say enough about him." 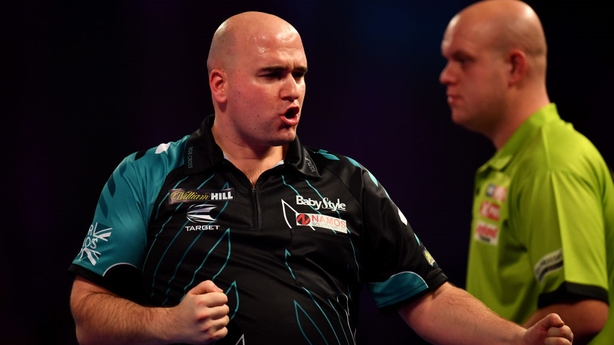 The Englishman led for much of the semi-final and eventually finished off the defending champion in a sudden death leg to claim a remarkable 6-5 victory.

Cross, in his first season as a professional, is now on the verge of a maiden world title.

In a contest that finished after midnight, Van Gerwen was always chasing Cross as the players traded sets, until nudging ahead for the first time at 5-4.

Cross took advantage of uncharacteristically poor finishing from the Dutchman to set up a decider that followed the pattern of the match.

Both players squandered opportunities to win it before Cross held his nerve in sudden death.

ONE OF THE GREATEST MATCHES YOU WILL EVER SEE

Rob Cross is into the World Championship final against Phil Taylor after a truly incredible game against world number one, Michael van Gerwen

Cross told Sky Sports Darts: "Words can't explain it. Don't get me wrong I played well, but the crowd helped me, they really did. They got on Michael's back and that's why I won.

"At points I felt inexperienced, I really did, but I still got through. I will come out (in the final) and want to win.

"He (Taylor) is my favourite player actually. He was dominant and now he's leaving, it's going to be special for him but at the same time I've got to do my own job and do what I need to do to win that game.

"I'm just a working boy, I come from a normal household and don't get me wrong, I believe in my own ability and that's only why I got here."