The 57-year-old, playing in his last tournament before retirement, claimed a 5-3 victory at Alexandra Palace to keep alive his hopes of winning a 17th world title.

Van Gerwen was made to work significantly harder on his way to a 5-4 win over Dutch compatriot Raymond van Barneveld in a thrilling quarter-final.

Taylor will meet provisional-round qualifier Jamie Lewis in the first of Saturday's semi-finals, while Van Gerwen will take on Rob Cross.

Two-time world champion Anderson beat Taylor in the 2015 final but he was in danger of being blown away after falling 4-1 behind in double-quick time.

The Scot rallied and threatened to take the match into a decider at 2-2 in the eighth set, only for Taylor to hold his nerve to find double 10.

"It was a struggle, my energy levels went down towards the end," Taylor told Sky Sports.

"But I just knew I had to keep putting him under pressure. Gary's done a lot more work than me this year. He's been everywhere, done everything and has a young baby, so it's difficult for him.

"It's the greatest feeling in the world hearing the fans chant my name and I'm going to miss it after this week." 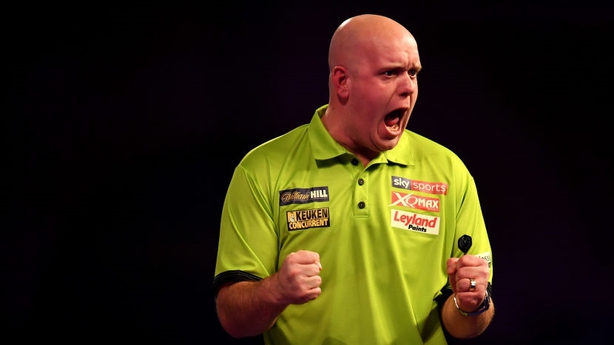 Van Gerwen is the biggest threat to Taylor's hopes of ending his glittering career on a high and the 2016 winner displayed his champion qualities to secure a nervy win over Van Barneveld.

The top seed was in danger of exiting the tournament at the quarter-final stage after Van Barneveld made it 4-4 to set up a decider.

But Van Gerwen dug deep to avoid a repeat of his 2016 defeat at the hands of Van Barneveld.

This stunning match finally comes to an end - MvG will face Rob Cross in the semi-final 👏🏼#WHdarts  #LoveTheDarts pic.twitter.com/qkpBceMpz0

Van Gerwen appeared to be cruising in the fifth set only to miss a crucial dart at double eight.

Van Barneveld rallied to make it 3-2 and then registered another 121 checkout on his way to levelling the contest.

The momentum was back with Van Gerwen as he claimed the seventh set but back came Van Barneveld with a nerveless 84 finish.

The match was effectively settled when Van Gerwen broke Van Barneveld with a 96 checkout.

This will hurt for a while but I gave it all I got. @MvG180 is such a great Champion and I hope he goes on to win it !! I will be back next year because I will never give up !! Thank you to all my sponsors and fans for the support ! pic.twitter.com/eUog5hmeab

"At the beginning Raymond was playing well and I was struggling a little bit," Van Gerwen told Sky Sports.

"I think everyone could only dream of a quarter-final like this because we both averaged a quite good standard.

"I'm really glad I was the winner. He played really good. I didn't expect him to keep his motivation up so long. He normally shakes his head when he's behind but he didn't do that.

"That's a positive thing for him but the negative thing is I'm through to the next round."

Van Gerwen will take on Cross after the 20th seed held off a spirited fightback from Dimitri Van den Bergh to win by the same scoreline.

Earlier, Jamie Lewis stormed into the semi-finals with a 5-0 whitewash of Darren Webster.

The 26-year-old provisional-round qualifier, who defeated second seed Peter Wright before earning his quarter-final place with a 4-1 win over James Richardson, lined up a meeting with Phil Taylor after a dominant performance.