Gurney became the first Irish player to win a major when he claimed the PDC event in Dublin last night with a sensational 5-4 win over Australia’s Simon Whitlock.

The Derry man now moves to number six in the world and he maintains that Dolan’s run to the final back in 2011 paved the way for his success.

Dolan became known as the ‘History Maker’ after hitting the first ever double-in nine-dart finish in that year's semi-final.

He went on to lose in the final to Phil Taylor but Gurney says that his Northern Ireland international team-mate was an inspiration.

"Let’s not overlook what Brendan did," Gurney told RTÉ Sport after his £100,000 victory at Citywest.

"Brendan got to a final, got beaten by Phil Taylor, the very next year he got beaten by Mervyn King in a semi-final, which is a great record.

"And he done a nine-darter on the way to that final. So Brendan has done a lot for us.

"He’s messaged me through the week, just wee bits that I should thank Brendan for because at the end of the day if it wasn’t for Brendan, we wouldn’t be on the map."

The Ulster thrower could barely believe what he had achieved, adding : "I'm the happiest person in the world.

"I’ve got this gorgeous trophy and I’m waiting to wake up, for somebody to go ‘we’re only lending that trophy to you for five minutes’. I can’t believe it."

Gurney also responded to comments surrounding an incident, for which he received a warning, after he had clinched the fourth set. 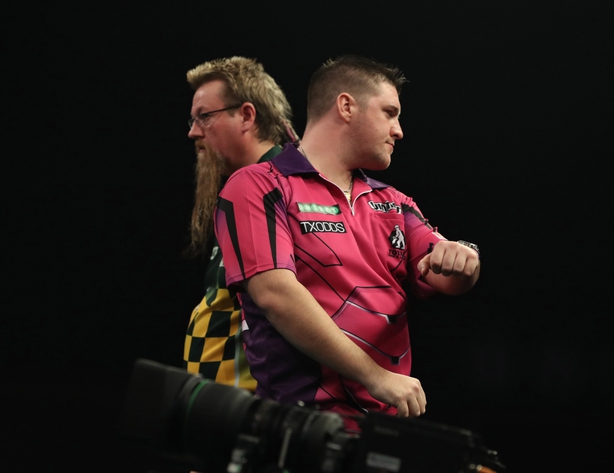 The 31-year-old appeared to make contact with Whitlock as he went to celebrate levelling the game.

"It was completely an accident," he wrote on Twitter.

"I turned around to celebrate the set and moved out of Simon's way. Our shirts touched and it looked worse than it was.

"It was my first major final and I was so exited and at times I took my time with the doubles to make sure I gave myself the best chance of hitting it."

Speaking after the game, Whitlock said of the incident: "I thought ‘what’s going on here?’ and he’s brushed into me, that’s getting a bit personal now. But..I’m happy for him, we’re still going to be good mates after this."