Daryl Gurney’s mission to claim a maiden major darts title may be slightly less complicated without the presence of one Phil Taylor but the Derry man still wishes the Power had not opted out of the World Grand Prix.

The Irish number one’s recent form means that there are only four players ahead of him in the betting for the tournament, which starts in Dublin this evening.

Eleven-time winner Taylor decided not to travel as he winds down his career, but only defending champion and world number one Michael van Gerwen, Gary Anderson, Peter Wright and Mensur Suljovic have lower odds to claim the £100,000 prize.

But, speaking to RTÉ Sport, Gurney says he would have liked the 16-time champions of the world to be here.

"I’d prefer if Phil was here, to be honest," said the world number 12, who faces two-time world champion Adrian Lewis in the first round at Citywest (7pm).

"Last year there was no talk about retirement so I wish he had come to say a final goodbye because the Dublin crowd love him.

"It’s unfortunate the crowd won’t get a chance to say a final farewell."

That said, the 31-year-old, who was a semi-finalist at this year's UK Open and World Matchplay, now has one less obstacle to overcome this week.

With the sport no longer dominated, as it was for so many years, by one man, there are opportunities out there.

Van Gerwen may sometimes look invincible but he has his off days; Anderson, who is not a big fan of the double-in format, can be shaken.

Wright has won 10 titles this year, while Suljouvic, who won yesterday’s Players tournament in Dublin, claimed the star-studded Champions League two weeks ago. 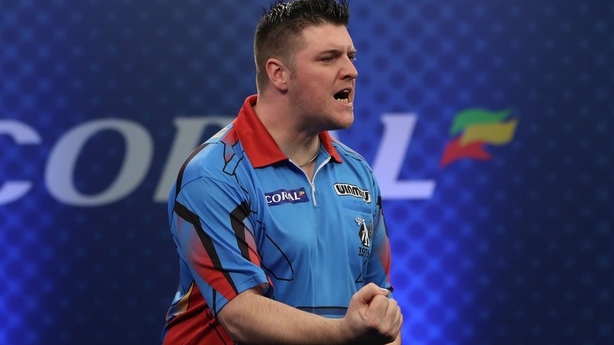 Thanks mainly to the retiring Taylor’s feats over 20 years, the standard within darts has risen and Gurney feels he is in a place where he can make a breakthrough.

"There’s some great players there, it gives me an extra bit of confidence [to be among the favourites]," the man known as Superchin said.

"I can do it, I can beat those players, especially when it’s on the stage I always play better.

"I’ve beaten Mensur a few times, I can definitely go on and do what he has done, win tournaments, I can beat all the big players like Mensur has done.

"Hopefully I’ll do that, I’ll win my TV major."

?? Mensur Suljovic is the winner of the Champions League of Darts.