He may be the heir apparent to the darts throne but Michael van Gerwen says he won’t try to emulate Phil Taylor.

The Power has been champion of the world 16 times and changed the face of the sport over the last 20 years.

Van Gerwen is the current world number one and won the World Championship in 2014.

England’s Adrian Lewis and Gary Anderson of Scotland have also claimed the top prize in the game in the last few years but the 26-year-old Dutchman has looked most likely to take over the mantle from Taylor, 55.

Taylor rose up and dominated the game like no other but his excellence meant that everyone else had to raise their game to compete.

And they did. Four different winners of the World Championship, including Taylor, over the last four years is evidence of that.

Mighty Mike is a confident young man but he also recognises that darts has entered a new phase.

“The level at the moment is much higher than it used to be. If you are looking the last few years I won about nine majors, Phil Taylor won [over] 80 majors. There’s a big difference so I think that’s really difficult to catch.

“I know I’m young but who says I’ll still play darts in ten years? You never know. Phil’s role will always be special but I’m on my way and trying to [get] as many tournament wins as possible.”

MVG is in Dublin defending his Grand Prix title and, after beating Mark Webster in the semi-final, faces Robert Thornton tonight in Citywest.

The number one seed is the overwhelming favourite to land his third double-start format title in Dublin and the £100,000 prize after a comprehensive 4-1 win over Webster.

“If I play my game he won’t touch me so that makes it even more difficult for myself,” he said.

“I only need to make sure I do everything in my power in my preparation so if I don’t make a mistake then I can rock ‘n’ roll.

“If you are not a man on a mission there’s something wrong. I’m number one in the world, people expect you to play well all the time. That’s difficult but I try it time after time.

“It’s amazing [to be in another final]. What can I say? I think I played quite well and I did the right things at the right moments. Sometimes my double-in start wasn’t all that great but my scoring power was far too high for him. That makes me win this game.

“Mark is a fantastic player but his scoring was not there tonight. I think he can look back on a fantastic tournament so far. I hope I can keep this form.

“I play [my opponent] but also the board, just a combination of both of them. It felt to me that he couldn’t win because you could see there was a little bit of pressure on him to win this game.”

Thornton was seeded seventh for this tournament, which saw James Wade, Raymond van Barneveld, Taylor, Lewis and Anderson all fail to make the semi-finals, and had a 4-2 win over surprise package Mensur Suljovic in last night’s semi-final.

“I’m in the final. I’m just going to get up there and enjoy myself and hopefully it’ll be good,” he said.

Tonight's final will be preceded by the final of the Tom Kirby Memorial Irish Matchplay championship between Mick McGowan and Tom Biggane, with the winner qualifying to compete in the William Hill World Darts Championship. 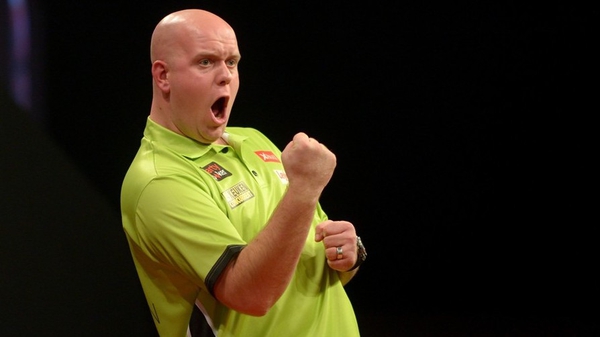