Former champions Phil Taylor and James Wade were sensationally knocked out of the partypoker.com World Grand Prix on a thrilling night of first round action on Monday.

Taylor had travelled to Dublin aiming to win the double-start tournament for a 12th time since 1998, but saw his hopes dashed at the Citywest Hotel as he lost in straight sets to Vincent van der Voort - despite missing the bullseye for a nine-dart finish.

"Phil's the best player every and everything around him is magical," said van der Voort. "To beat him here is an amazing feeling.”

World number six James Wade, the 2007 and 2010 winner, was also eliminated as Austrian ace Mensur Suljovic came from a set down to win 2-1 with six straight legs in a high-quality clash.

World champion Gary Anderson began his challenge with a superb straight-sets win over Scottish rival John Henderson, who was only able to win one leg as the number two seed averaged almost 98.

"Phil's the best player every and everything around him is magical"

Anderson will now meet Ian White, who enjoyed a 2-0 win over Jamie Caven as he moved into the last 16 in Dublin for a second time.

Thornton now takes on Justin Pipe, who came from a set down to defeat Steve Beaton 2-1 in their first round clash.

The second round kicks off this evening (7pm) with the four games from the top half of the draw, including reigning champion Michael van Gerwen's clash with Belgian ace Kim Huybrechts. 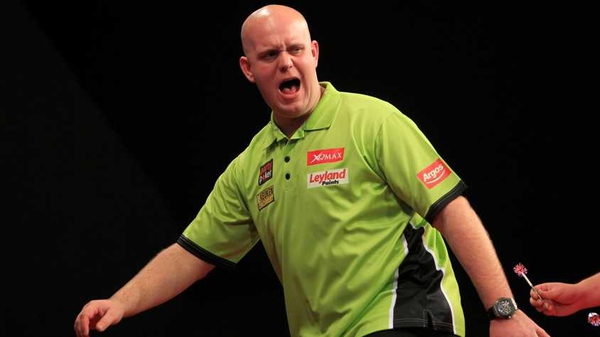