World number one Michael van Gerwen remains top of the Betway Premier League after demolishing Dutch compatriot and reigning champion Raymond van Barneveld 7-2 in front of a crowd of more than 9,000 at the 3Arena in Dublin.

Fourth on the bill, this was the match that the crowd had waited for and the two former world champions did not disappoint early on.

Three of the nine 180s came in the first leg.

MVG began with two maximums in the second leg and then hit another, a treble 19, but pulled his last dart into the 12 to make sure the three-year Premier League wait for a nine-darter went on.

Mighty Mike raced into to a 3-0 lead in typical fashion, giving Barney no chance to settle in front of the famously loud Dublin support.

“I tried from the beginning to put his confidence a little bit down,” admitted Van Gerwen, who knew his opponent would be on a high after a stunning win over Phil Taylor last week. 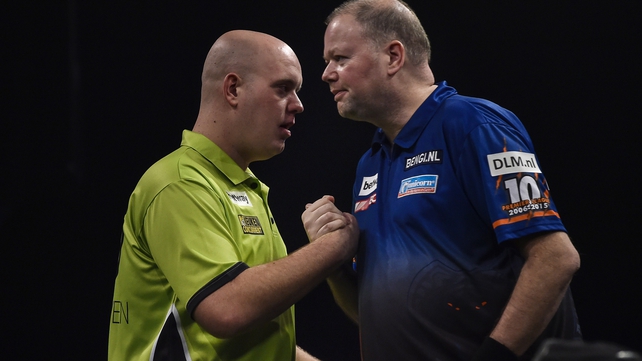 The five-time champion then put a stop to the rot, winning the next two of the next three to give himself some chance.

However, that only spurred the 2013 champion into action and, along the way to recording a 108.71 average, he was ruthless and ended the contest with a 160 finish, the highest out-shot of the night.

The shaven-headed Vlijmen thrower now sits two points clear of Gary Anderson at the top of the table.

Adrian Lewis was first up against third in the table Dave Chisnall and never really got into his powerful stride.

There was a mathematical chance that Jackpot could be eliminated but once he took the first leg he was guaranteed survival for another week at least. 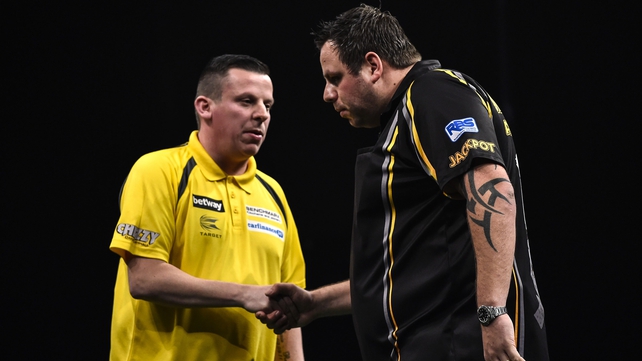 The twice world champion did hit three maximums but converted just two of 13 doubles, a stat that tells its own story, on the way to a 7-2 loss.

Of Lewis’s abysmal 13% on the doubles, Chisnall (50%) reflected afterwards: “I can’t tell him how to throw his darts, if he wants to miss and let me in I’ll take it every day of the week.”

Stephen Bunting missed the chance the secure his place in the next phase as he fell 7-4 to world champion Anderson.

After blowing a 5-1 lead last week against Peter Wright, the Bullet couldn’t build on a 4-2 lead after breaking the 44-year-old twice early on. 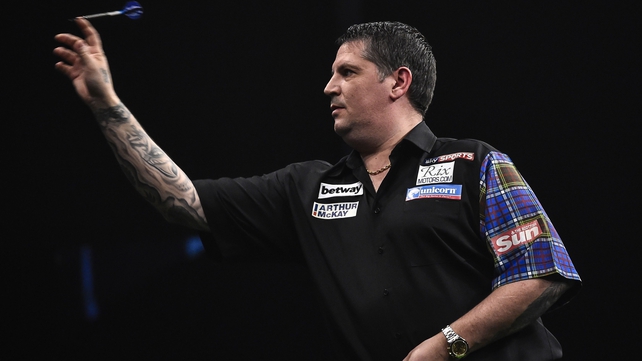 Anderson, who finished with an average of 96.8, then reeled off five legs on the trot, despite miscounting and leaving himself finishes of 30 and 10 along the way, something he put down to a “brain-freeze” afterwards.

James Wade left Snakebite Wright sweating on results next week with a 7-3 win.

The Machine flew into a 3-0 lead with a 100% check-out rate before going on to miss 21 doubles on the way to a 7-3 win, later admitting that he was affected by Wright’s poor throwing, and that he felt “lucky” to take home “two big points”. 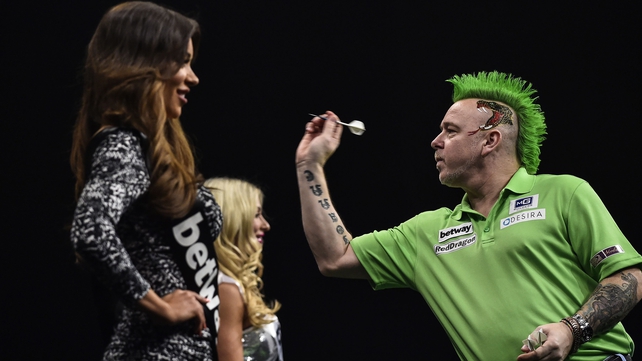 The final contest of the night saw Taylor, five-time winner, almost certainly end debutant Kim Huybrecht’s interest a week ahead of the final phase of the opening stages.

The Belgian plays Bunting, who will himself need a win or hope that other results go in his favour, next week but needs an unlikely series of scores to survive Judgement Night, which sees the bottom two eliminated.

Afterwords, Taylor said that he saw the RTÉ documentary on boxer John Joe Nevin last night and it inspired him to his win. "A cracking lad," said the 16-time world champion.