Michael van Gerwen will take on Mervyn King in the quarter-finals of the partypoker.com World Grand Prix in a repeat of the 2012 final on Friday night, as Stephen Bunting and Richie Burnett joined them in the last eight at Citywest in Dublin with second round wins.

World Champion van Gerwen defeated Dean Winstanley 3-1 in a quick-fire contest has he continued his challenge to win back the €125,000 title on Sunday night.

Van Gerwen edged a high-quality opening set 3-2 before Winstanley took out 136 and a 12-darter as he raced through the second to level the contest.

The Dutchman, though, came from a leg down to win the third set in a deciding leg - taking out 120 for a 12-darter - before winning the fourth 3-1 to seal his place in a third successive Dublin quarter-final.

"I made it difficult for myself," admitted Van Gerwen, whose average of 98.06 was the highest of this year's event so far.

"In the first set I played really well but in the second set I couldn't hit a double and Dean did well, hitting some good finishes at the right moments.

"I'm pleased to be through and I am happy to have such a high average because I missed a few doubles and I know I can do better. There is more to come."

Van Gerwen's last eight opponent will be Mervyn King as they meet in a repeat of the 2012 World Grand Prix final which the Dutchman won 6-4 with a comeback triumph to claim his first major PDC title.

King secured his place in the quarter-finals with a 3-1 victory over Raymond van Barneveld in a bizarre contest.

The Dutchman led 2-0 in the opening set only to be punished for failing to take his chances to move ahead as King hit back with three successive legs to claim the set and then took another treble to win the second set without reply, including a 112 checkout.

Van Barneveld then won the third 3-0 to raise the prospect of another comeback victory - following his first round revival against Dave Chisnall - only to see his starting doubles desert him in the fourth set, with the Dutchman clearly struggling with a back problem as King took three straight legs for victory.

"I missed a few doubles and I know I can do better. There is more to come" - Michael van Gerwen

Stephen Bunting hit a stunning 12 180s and three ton-plus finishes as he continued his superb World Grand Prix debut with a 3-2 defeat of Peter Wright.

Lakeside Champion Bunting took out 141 on his way to the first set, only to see Wright win six of the next seven legs as he took a 2-1 lead in the game, sealing set three with a superb 146 finish.

Bunting, though, came from 2-1 down to edge the fourth set and also hit back from behind in the decider, winning three successive legs as a 130 bullseye checkout moved him through.

2011 semi-finalist Richie Burnett was the night's other second round winner, as he produced a clinical display to defeat Terry Jenkins - a two-time World Grand Prix runner-up - 3-1.

The Welshman finished 121 to secure the opening set 3-1 and edged the second in a deciding leg to move two sets clear.

Jenkins raced through the third set without reply, despite 180s from Burnett, but the former Lakeside Champion won the fourth in the same manner as he completed the win.

The quarter-finals will also see reigning champion Phil Taylor taking on two-time winner James Wade - who hit a stunning nine-darter in his second round win over Robert Thornton - in an eagerly-awaited contest, while Gary Anderson meets Kevin Painter. 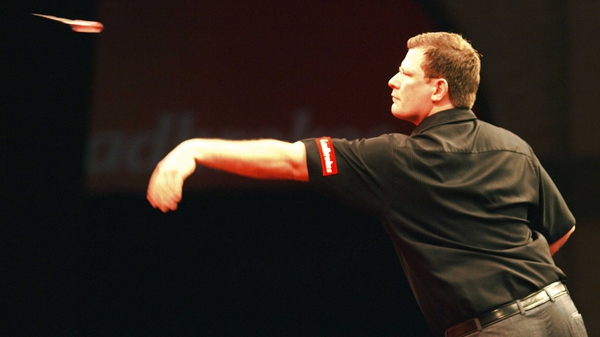